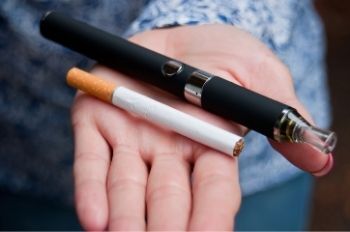 Our psychologists say e-cigarettes might not be a safer alternative to smoking during pregnancy and have called for more awareness of the risks.

E-cigarettes are often considered a less harmful alternative to traditional cigarettes as they don’t produce toxins, like carbon monoxide, but they do contain nicotine.

So our researchers carried out the first known study into the effects of prenatal nicotine exposure on babies.

They found that babies of mothers who used e-cigarettes during pregnancy had similar abnormal reflexes to infants whose mothers smoked cigarettes.

This can include babies not grasping a finger with their hand or not being startled if the hand supporting their head is suddenly removed. This can be a sign of impaired brain development.

Babies of mothers who smoked traditional cigarettes during pregnancy had significantly lower birthweight and head circumference in comparison.

However, babies exposed to nicotine in the womb, either from cigarettes or e-cigarettes, did have a greater number of abnormal reflexes and slightly decreased self-regulation abilities compared to the babies of non-smokers.

Self-regulation in infants can include self-relaxation when held, how consolable they are after crying, self-quieting skills and hand-to-mouth movements.

The study also found that higher amounts of nicotine matched with less motor maturity in babies, such as how floppy or rigid a baby is when held.

Our researchers say that while the sample size in their study is small, their findings give a strong indication that nicotine exposure from e-cigarettes could be harmful to fetal development and have called for more studies to be done.

They recommend that public health policymakers should be aware that e-cigarette use is not risk free and say the only safe way of reducing harm is not to smoke during pregnancy.