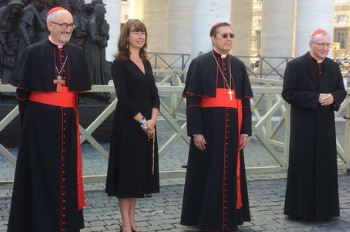 One of our leading theologians has spoken alongside Pope Francis at the global launch of his new Papal Encyclical – one of the Pope’s highest forms of communication.

Dr Anna Rowlands joined the Pope at Vatican City in Rome as he unveiled ‘Fratelli Tutti’.

Fratelli Tutti is a letter issued by the Pope to the world, addressing what he believes to be a critical moment in ecological, political, economic and social life. It follows in a long tradition of such global letters on social issues. This letter is the first to be issued out of an interfaith encounter. The letter focuses on our need to find creative solutions to issues such as the pandemic, inequality and political instability, with a particular focus on migration.

In her televised address, Anna reflected on the ‘spiritual discipline’ of the letter, observing that the Pope asks readers to understand that “to be truly human is to be willing to look at the world in its beauty and its pain, to listen deeply through human encounters to the griefs and the joys of one’s age and to take these into oneself, to carry them as one’s own.”

Following her address, Anna also briefed global ambassadors who are accredited to the Holy See, known as the Vatican Diplomatic Corps, on the economic and political contents of the document.

Anna was appointed to the St Hilda Chair in 2017; a role that was endowed and established in 2014 thanks to a number of major UK and international benefactors. The purpose of the Chair is to provide thought leadership related to the history and development of Catholic and wider Christian ‘social teaching’ or analysis.

This involves study of the development of ideas such as human dignity and the common good. Anna also works on the ethics of forced migration and is a co-investigator on the AHRC/ESRC @refugeehosts project.

Anna is also a member of the Board of the University of Notre Dame's London Global Gateway, managed by Notre Dame International University, and led by Associate Vice President Warren von Exchenbach and Vice President Michael Pippinger.

In October 2007, Durham University opened The Centre for Catholic Studies (CCS), which is the first of its kind in British higher education and is the UK’s first permanent centre devoted to pioneering world-class research and teaching in Catholic theology.