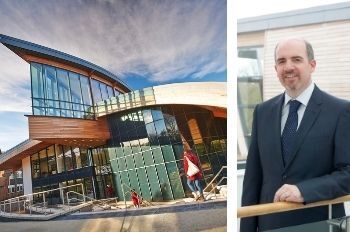 Professor Thom Brooks, Dean of Durham Law School, has been appointed President of the Society of Legal Scholars

Did you know that students who join Durham Law School are joining a world top 50 department where they’ll be taught by some of the world’s leading experts?

Professor Thom Brooks, Dean of Durham University Law School, has been appointed as President of the Society of Legal Scholars (SLS) 2020-21.

The SLS is the oldest and largest learned society for academic lawyers and works to advance legal education and scholarship in the United Kingdom and Ireland. Past presidents have included Lord (Andrew) Burrows, recently appointed to the UK Supreme Court.

During his time as President, Thom, an award-winning author, columnist, policy advisor and public speaker, aims to further raise the profile of academic lawyers to show how their work contributes to our understanding of law academically, practically and for public benefit.

Our Law School produces ground-breaking research that brings change both nationally and internationally and our students are taught by the some of the very best researchers in their field.

Durham graduates include some of law’s leading figures, such as current members of the UK Supreme Court, the Court of Appeal, Members of Parliament and Government.

Thom’s new role is the latest in a long line of achievements for Law at Durham including:

Thom said: “Durham has a proud heritage of producing superb Law graduates who are taught by academics whose research is making a meaningful difference to the world.

“I am enormously honoured to be elected the Society’s President for 2020-21.

“There is a long tradition of academic excellence and engagement between academia and the wider legal profession that is inspiring and enriching that I am dedicated to promoting to the best of my abilities.”