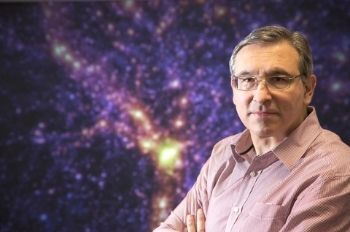 A world-leading Durham cosmologist has been recognised as being “of Nobel class” for his work on the evolution of the universe.

Professor Carlos Frenk is one of 24 Clarivate 2020 Citation Laureates announced worldwide. These are researchers whose work is deemed to be “of Nobel class”, as shown by analysis carried out by the Institute for Scientific Information.

Carlos receives the honour for his fundamental studies of galaxy formation and evolution, cosmic structure, and dark matter halos.

Clarivate’s annual Citation Laureates recognise world-class researchers across all areas of science whose work has been highly-cited by fellow scientists and whose contributions to science have been extremely influential and transformative.

So far, 54 researchers listed in Clarivate’s Hall of Citation Laureates have gone on to receive a Nobel Prize.

Carlos is one of the world’s foremost scientists behind the theory of cold dark matter – the mysterious substance thought to make up a large part of the universe - the foundation of the current view of galaxy formation, and the cosmic large-scale structure.

And he is one of five Durham researchers included in the Highly Cited Researchers 2019 list from Clarivate.

This listing puts Durham first in the UK, third in Europe and joint fifth in the world for the strength of our research in Space Science.