Zooming in on dark matter 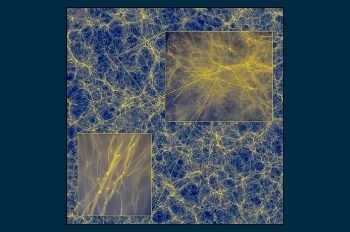 Our cosmologists have zoomed in on the smallest clumps of dark matter in a virtual universe (Credit: Dr Sownak Bose, Center for Astrophysics, Harvard University).

Our cosmologists have zoomed in on the smallest clumps of dark matter in a virtual universe – which could help us find the real thing in space.

Using a supercomputer simulation of the universe they achieved a zoom equivalent to being able to see a flea on the surface of the Moon.

This meant they could make detailed pictures and analyses of hundreds of virtual dark matter haloes from the very largest (galaxy clusters) to the tiniest (about the same as Earth’s mass).

Counterintuitively, in the densest regions of the haloes particles and antiparticles of dark matter can collide, producing gamma-ray radiation.

By zooming in on these relatively tiny dark matter haloes the scientists can work out the amount of radiation expected to come from haloes of different sizes.

This means that very small haloes could be identified in future observations by the radiation they are thought to give out.

This would confirm the theory of the nature of dark matter - which may not be entirely dark after all.

Most of the universe’s matter is dark and completely different in nature from the matter that makes up stars, planets and people.

Galaxies formed and grew when gas cooled and condensed at the centre of enormous clumps of this dark matter - so-called dark matter haloes.

Scientists can infer the structure of large dark matter haloes – some 1,000 trillion times heavier than our Sun - from the properties of the galaxies and gas within them.

But they have no information about smaller dark matter haloes – including those of mass comparable to the Earth’s – that are too tiny to contain a galaxy.

By zooming-in on the virtual universe in such microscopic detail, our researchers studied the structure of dark matter haloes ranging from those the mass of Earth to a big galaxy cluster.

The research sheds light on small haloes as we seek to learn more about what dark matter is and the role it plays in the evolution of the universe.