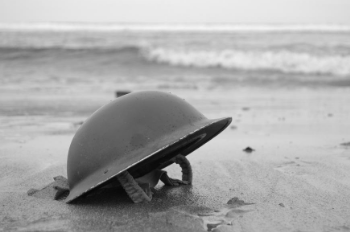 In an era before the internet and smartphones the dropping of the atomic bombs and eventual surrender of Japan on VJ Day was reported in more traditional ways.

Professor Tim Luckhurst, Principal of our South College, has explored how the popularity of newspapers helped spread these stories to huge audiences, offering images and commentary that radio, the only existing form of broadcast media, could not.

The Anglo-American Manhattan Project that built the atomic bomb was a fiercely guarded secret with only a small number of political leaders and scientists knowing about it.

When the first bomb hit Hiroshima on 6 August, Britons and Americans reached for their favourite newspapers to read about it, with many reporting that they were stunned by the new technology.

The Manchester Guardian's first reports concluded that it was the result of 'Immense co-operative effort by ourselves and US', and The Daily Mail informed readers that Japan faced obliteration by 'the mightiest destructive force the world has ever known - unless she surrenders unconditionally in a few days'.

Nobody expected the war to end so soon. On Okinawa, the smallest and least populated of the five main islands of Japan, American forces had lost 10,000 in their campaign to expel the Japanese garrison and it was widely believed the war would carry on much longer if the US and British forces tried to continue to conquer Japan in this way.

The Sunday Times wrote: ‘The invasion of the Japanese homeland, if and when it comes, may be a very tough and expensive affair'. The dropping of the atomic bombs confirmed this theory.

Following the bombing of Nagasaki on 9 August, the realisation of the magnitude of this new weapon began to emerge. Winston Churchill wrote that 'This revelation of the secrets of nature, long mercifully withheld from man, should arouse the most solemn reflections in the mind and conscience of every human capable of comprehension'.

The Manchester Guardian agreed stating: 'The most notable thing about the discussion of the bomb here today is that hardly anyone mentions the fact that it will shorten the war with Japan. That seems unimportant compared with the fact, so suddenly and appallingly revealed to us, that we have devised a machine that will either end war or end us all’.

Britain celebrated VJ Day on 15 August 1945 when, at midnight, the Prime Minister, Clement Atlee, confirmed the news saying: ‘The last of our enemies is laid low’, and US President Harry S Truman declared the day as ‘Victory over Japan Day’ at a White House press conference.