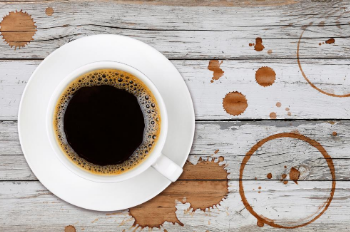 Have you ever spilled your coffee on your desk? You may then have observed one of the most puzzling phenomena of fluid mechanics – the coffee-ring effect.

Coffee rings form because the liquid evaporates quicker at the edges, causing an accumulation of solid particles that results in the characteristic dark ring.

Inks behave like coffee – particles in the ink accumulate around the edges creating irregular shapes and uneven surfaces, especially when printing on hard surfaces like silicon wafers or plastics.

This effect has hindered the development of functional inks that can be used on graphene, 2D materials, and nanoparticles because it makes printed electronic devices behave irregularly.

Now, a team of researchers from Cambridge, Durham, and Beihang Universities have created a new family of inks that overcomes this problem, enabling the cheap industrial-scale manufacture of electronics such as sensors, light detectors, batteries and solar cells in large numbers, using inkjet technology.

Using the new inks, the team printed 4,500 nearly identical devices on a silicon wafer and plastic substrate. Gas sensors and photodetectors were printed with very little variations in performance. Previously, printing a few hundred devices was considered a success, even if they showed uneven behaviour.

From coffee rings to pancakes

The new inks avoid the use of commercial additives that tackle the coffee-ring effect, but which can ruin the electronic properties of graphene and other 2D materials. Instead, they use a simple blend of two alcohols: isopropyl alcohol and 2-butanol.

They showed that droplets from this solvent blend to form micro-pancakes on a surface rather than the normal spherical shapes. These pancakes dry into patterns with uniform thickness and properties. Just what is needed for high-performance devices.