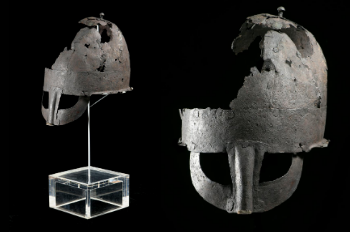 A team from our Archaeology Department have been helping to uncover the past of a rare Viking artefact.

The origins of a corroded, damaged helmet, which was unearthed in Yarm, Stockton-on-Tees, UK, has caused much debate for many years and Dr Chris Caple and his team were asked to carry out research to find out more about it.

Known as ‘The Yarm Helmet’, this unusual find was discovered in the 1950s by workmen digging trenches for new sewerage pipes and has been on display at Preston Park Museum in Stockton for a number of years.

Using evidence from recent archaeological discoveries as well as analysis of the metal and corrosion, the new research has revealed it’s a rare Anglo-Scandinavian (Viking) helmet made in the 10th century in northern England.

First in the UK

Although there’s half a dozen early medieval helmets from Britain, this is the first Anglo-Scandinavian helmet, the only other near complete one is from Gjermundbu in Norway.

These types of ancient helmets would not normally survive for so long as when the Anglo-Scandinavian and Saxons became Christians in the 10th century, they stopped burying them in graves, which preserved them.

The research and analysis shows that the Yarm Helmet appears to have been hidden in a pit and the waterlogged conditions stopped it eroding completely.