How earthquakes shape the landscape 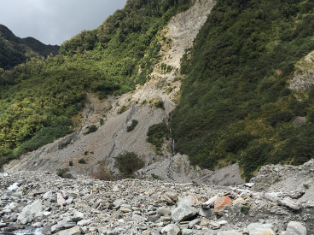 Our geographers have revealed just how large earthquakes can change the physical features of the landscape surrounding them.

The researchers studied soil matter sediments from Lake Paringa, in New Zealand, applying a combination of geochemical techniques to help understand erosion patterns at different levels of the landscape surrounding the lake.

Archived soil data from the past 1,000 years, during which time four large earthquakes occurred, was also used to reconstruct erosion patterns during and after these quakes.

The result is the first demonstration that repeated large earthquakes cause erosion on high ground, while periods between earthquakes appear less effective at modifying the highest parts of the physical landscape.

The findings showed that erosion patterns changed significantly following the quakes, starting at higher levels, which in turn influenced the land lower down the lake hillsides by altering how it eroded over time.

In contrast, our researchers also found that erosion caused by intense storm rainfall happened at lower levels during periods between earthquakes on the lake hillside, but was still influenced by the higher level erosion caused by the seismic events, with new water courses and channels being carved out.