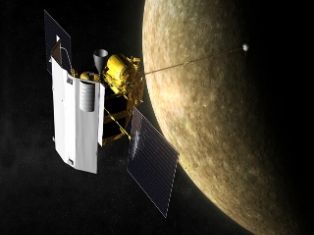 Our researchers have helped to find a way of measuring neutron lifetime from space for the first time.

The discovery could teach us more about the early universe as knowing the lifetime of neutrons is key to understanding the formation of elements after the Big Bang 13.8 billion years ago.

As MESSENGER flew over Venus and Mercury it measured the rates at which neutron particles were leaking out from the two planets.

The number of neutrons detected depended on the time it took them to fly up to the spacecraft relative to the neutron lifetime, giving the scientists a way of calculating how long the subatomic particles could survive.

Neutrons are normally found in the nucleus of an atom but quickly disintegrate into electrons and protons when outside the atom.

Scientists have previously used two lab-based methods – the so-called “bottle method” and “beam” technique - to try and determine the lifetime of neutrons.

This latest research could provide a route to end a decades-long stalemate that has seen scientists disagree – by a matter of seconds – over how long neutrons are capable of surviving.

Researchers behind this study say that more precise measurements would require a dedicated space mission, possibly to Venus, as its thick atmosphere and large mass trap neutrons around the planet.

They hope to design and build an instrument that can make a high-precision measurement of the neutron lifetime using their new technique.