Dunkirk: how British newspapers helped to turn defeat into a miracle 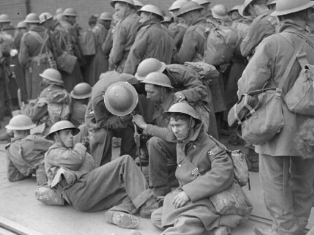 As the UK gets ready to mark the 80th Anniversary of the rescue of the British Expeditionary Force (BEF) from Dunkirk, Professor Tim Luckhurst, founding Principal of our new South College, looks at how British newspaper journalists were forced to report it from afar.

Modern Britons associate The Great Escape with the 1963 film of that name starring Steve McQueen, referring to, of course, a mass escape by Allied prisoners during the Second World War. But this title might more appropriately be applied to the rescue of the British Expeditionary Force (BEF) from Dunkirk between May 27 and June 4 1940.

As the UK marks the 80th anniversary of that escape, we shall hear much of the author JB Priestley’s first “postscript” for BBC Radio on Wednesday June 5. That broadcast coined the phrase “Little Ships” and even acknowledged Priestley’s own part in shaping understanding of Dunkirk. He asked listeners: “Doesn’t it seem to you to have an inevitable air about it – as if we had turned a page in the history of Britain and seen a chapter headed ‘Dunkirk’?”

But there was nothing inevitable about it.

Before pledging to “fight them on the beaches”, Winston Churchill himself reminded the House of Commons in the same speech that “wars are not won by evacuations”. He acknowledged that the BEF had courted disaster before depicting its escape as “a miracle of deliverance”. That the British public regards it as a triumph owes much to the work of British newspaper journalists and the Royal Navy press officers who briefed them.

How the ‘miracle’ came about

Dunkirk was not reported in eyewitness accounts from the beaches. The few war correspondents who struggled back with the retreating armies had no means by which to communicate. Reports, such as Evelyn Montague’s The Miracle of the BEF’s Return for the Manchester Guardian of Saturday June 1 1940, were penned by journalists invited to witness the Royal Navy’s delivery of evacuated soldiers to the ports of south-east England. There, they were briefed with patriotic fervour and naval pride as well as facts.

The first sentence of Montague’s piece gives a flavour of the mood that was inspired:

‘In the grey chill dawn today in a south-eastern port, war correspondents watched with incredulous joy the happening of a miracle.’

The reporter – a grandson of the famous Guardian editor and owner C.P. Scott – did not fail to give the Royal Navy credit. Having described a waterfront hotel in which “every armchair held its sleeping soldier or sailor, huddled beneath overcoat or ground sheet”, Montague turned to the scene in the port:

‘As the rising sun was turning the grey clouds to burnished copper the first destroyer of the day slid swiftly into the harbour, its silhouette bristling with the heads of the men who stood packed shoulder to shoulder on its decks.’

Back in 1940, the Times did not award reporters bylines. Its report of the BEF’s return on June 1 was by “Our Special Correspondent”. He too witnessed the scenes in a south-eastern port (security censorship forbade more precise identification). The men, he wrote, were “weary but undaunted”. Protected by “the ceaseless patrol maintained by British warships and aeroplanes in the English Channel”, men who had displayed “steadiness under a cruel test” were “pouring onto the quays”.