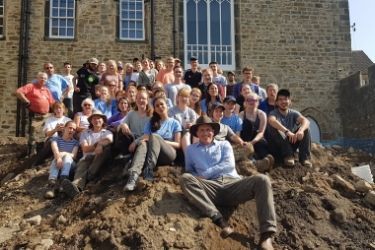 Our archaeologists have unearthed the secrets of Britain’s most powerful bishops to teach us more about the country’s medieval past.

The Prince Bishops governed the Palatinate of Durham – a role that gave them exceptional power beyond that of any other bishop in the land.

Working with our partners The Auckland Project, our experts led a dig at 900-year-old Auckland Castle, in County Durham, UK, which was once home to these influential rulers.

Their excavations showed that the Castle was once protected by medieval walls that were two-and-a-half metres wide and more than seven metres tall.

Inside the Castle’s imposing walls they found pieces of glass, cutlery and crockery that would have been on the Bishop’s table during the 17th Century.

The archaeologists also discovered scraps of centuries-old food like animal and fish bones, as well as shellfish and lobster, in what would have been the Castle’s medieval rubbish dump.

Digging Up Britain’s Past

The dig was the subject of a Channel 5 documentary, Digging Up Britain’s Past, which explores legendary figures from British history such as Henry VIII and Robin Hood.

The programme highlighted the excavations and discoveries made at Auckland Castle as well as talking to the team behind the discoveries.

The Digging Up Britain’s Past team also travelled across Britain to learn more about Anthony Bek, Bishop of Durham from 1284 to 1310.

They visited Dirleton Castle, in Scotland, which was besieged by the Bishop’s army, and Corfe Castle, in Dorset, to get hands on with medieval weapons of war.