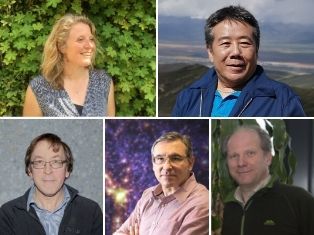 At Durham we’ve long had a global reputation for the high standard and impact of our research.

Now we’re celebrating because five of our researchers have been named among the world’s best for the quality and influence of their work.

The researchers are investigating the origins of the universe, nature-based answers to climate change, and the make-up of the Earth’s crust.

They have been ranked in the Highly Cited Researchers 2019 list from the Web of Science Group.

The list identifies scientists and social scientists whose research work is in the world’s top one per cent by citations in the Web of Science portal.

This shows the significant influence Durham’s researchers have among their fellow academics worldwide who have cited our research in their own studies.

Our five successful researchers are:

Professors Frenk, Jenkins and Theuns’ listing puts Durham first in the UK, third in Europe and joint fifth in the world for the strength of our research in Space Science.

Using supercomputers they create cosmological simulations of the universe to investigate galaxy formation and the properties of dark matter and dark energy.

Congratulating our academics, the organisers of the Highly Cited Researcher list said they were helping to “extend the frontiers of knowledge”.

This helps create “gains for society, innovation and knowledge that make the world healthier, richer, more sustainable and more secure”.

The Highly Cited Researchers 2019 list is compiled by the Institute for Scientific Information at the Web of Science Group.

Professors Carlos Frenk, Adrian Jenkins and Tom Theuns are members of our world-renowned Institute for Computational Cosmology. Find out more about our research in Cosmology and Astronomy.

Professor Harriet Bulkeley, in our Department of Geography, co-ordinates the European NATURVATION project and is a member of the REINVENT project investigating climate solutions and decarbonisation in urban areas and industry.

Professor Yaoling Niu, in our Department of Earth Sciences, in an internationally regarded expert on the Earth’s crust and has worked in China, the USA, Australia and the United Kingdom.

Learn more about research at Durham and our position in world rankings.