Air pollution and the ethics of recommending facemasks 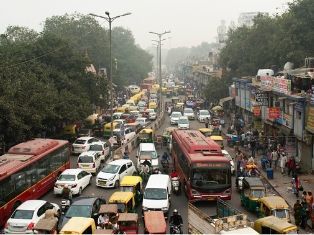 Air pollution was said to have reached 'unbearable levels' in Delhi.

Record levels of air pollution have been measured in some parts of the world posing a danger to human health.

Researchers have now produced a new framework to support ethical decision-making on whether to recommend or provide facemasks to the public to help reduce exposure to harmful pollutants.

Working as part of an international team, Durham expert Professor Claire Horwell has helped create the ethical framework that governments, health agencies and charities could use when considering the use of masks.

The United Nations Environment Programme has reported that over the past few months a series of air pollution episodes has set new records across Asia.

In India, Delhi’s Chief Minister described air pollution as being at “unbearable levels”, while earlier this summer poor air quality in Indonesia from vegetation burning led to people being evacuated and schools being closed.

Researchers behind the ethical framework say that clear decision-making about the use of facemasks could increase trust in the decisions made by agencies to protect the public from the effects of APDs.

The framework is built around ethical values and consists of eight questions looking at issues that could be raised during APDs.

These include examining the potential health impacts of hazards on communities; the potential for the intervention to cause more harm than good; and implications for trust between agencies and the public.

Agencies should carefully consider what pollution levels would trigger distribution of facemasks and what type of mask they might recommend, the researchers say.

They add that this is not just a question of what type of mask offers the best protection, but whether people are likely to wear the mask, what is most cost-effective and what mask is most practical.

They also recommend that talks between agencies and communities about these issues should take place before a disaster happens.

The Durham University researcher was Claire Horwell, Professor of Geohealth, in our Department of Earth Sciences. Claire was funded by the Research for Health in Humanitarian Crises programme (ELRHA).

The research was led by Associate Professor Fiona McDonald in the School of Law at Queensland University of Technology in Australia. It was funded by Durham University and the European Union through a Durham COFUND International Senior Research Fellowship.

Learn more about Hazard and Risk research at Durham.