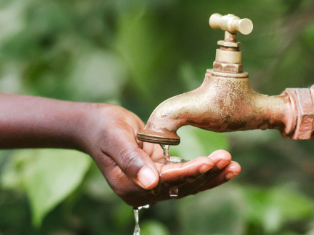 Surface science can make a big difference to our health, well-being and environment.

Our surface scientists at Durham have been working on a whole range of applications that have already changed our lives in some way (think mobile phones and puddles) and could make a real difference to people around the world, particularly in developing countries.

Oil spills happen fairly often, including big ones in oceans and seas as well as smaller ones on industrial sites. All have a damaging impact on the environment and wildlife so there is a clear need to find new easy, quick ways to separate oil from water.

This is exactly what our surface scientists have done. They have invented a smart coating that can be sprayed onto a mesh. This can then separate oil from water and kill bacteria in the water at the same time. It could be a faster and more eco-friendly way to clean up oil.

A variation of the smart coating for oil has also been developed for cloths. Contaminated water can be ‘sieved’ through the cloths to get rid of pollution in water supplies in developing countries. The added bonus is that the cloths are cheap to make and recyclable.

Antibiotic resistance is a big issue world-wide with thousands of deaths as a result of infections. They are often spread via surfaces, whether that’s in hospitals, at home or at work. Our team has developed a coating for cloths which can not only kill the bacteria, but the cloths can also be re-used making them better suited for the environment than current disposable ones.

Millions of us around the world can now drop our mobile phone in a puddle or down the toilet and find that it still works. This is thanks to a water-repellent coating developed here in our very own labs at Durham University.

Our team of surface scientists are always working on the next idea which can help to tackle some of the global challenges in society. We think this is pretty cool.