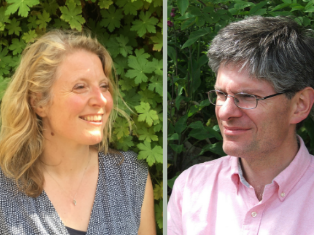 We’re celebrating after two of our academics were awarded Fellowships by the British Academy, the UK’s national academy for the humanities and social sciences.

Professor Harriet Bulkeley, Geography, and Professor Alec Ryrie, Theology and Religion, have been made Fellows in recognition of their contribution to their academic fields.

Harriet has been recognised for her work on the politics and governance of environmental issues. A particular area of interest for Harriet is climate change and the roles that cities and other actors such as businesses and communities play in responding to this challenge.

Harriet’s work has looked at questions and opportunities around energy, smart grids, infrastructure, housing, mobility and most recently, nature and biodiversity.

She is currently coordinating the NATURVATION project, working to understand the role that nature can play in addressing urban sustainability and the ways cities are experimenting with nature to address climate change.

Harriet is also working on a project called REINVENT, looking at the potential and challenges of decarbonising ‘hard to reach’ parts of the carbon economy such as meat, milk, plastics and steel production.

Alec’s research includes the history and effects of Reformation in England and Scotland, and the global spread of Protestant Christianity, which started in Germany in the early sixteenth century, and has spread across the world.

Alec’s research interests also include the history of religion and violence, looking not just at whether religion makes people more or less violent, but also how war and persecution shape people’s religious beliefs and practices.

Harriet and Alec are both part of Durham academic departments ranked in the Top 10 in the world.

They join a community of over 1,400 of the most respected academics in the fields of humanities and social sciences that make up the British Academy.

Information about studying in our world-leading departments of Geography and Theology and Religion.

Read about the British Academy and their fellowships here.