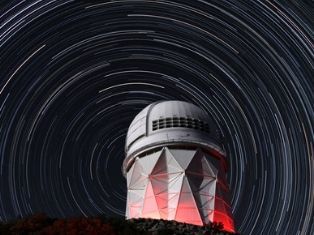 The Mayall Telescope, USA, will carry out one of three imaging surveys for DESI. Credit: P. Marenfeld & NOAO/AURA/NSF

Our physicists will help create a 3D map of galaxies to learn more about the universe’s accelerating expansion.

Durham University is a member of the £80million ($100million) multinational Dark Energy Spectroscopic Instrument (DESI) project that will target about 33 million galaxies and 2.4 million quasars.

DESI will measure these objects at different wavelengths of light to show how far and how quickly they are moving from Earth.

Five thousand swivelling robots will gather light from the galaxies and quasars so it can be split into colours and analysed using spectrographs.

The detailed map of galaxies will measure the universe’s expansion history across 10 to 12 billion years.

The data will also provide new information about how galaxies like the Milky Way formed out of primordial clouds emerging from the Big Bang and may even reveal hints to the nature of the dark matter.

We know the universe is expanding at an accelerating rate because objects in space are moving away from us.

Scientists say this cosmic growth is driven by a mysterious substance called dark energy, that makes up 68 per cent of the universe. The rest is mass, mostly dark matter, which opposes the push exterted by the dark energy in a cosmic tug of war.

No one knows what dark energy is and it’s hoped DESI will further our understanding of its role in the expansion of the universe.

Durham has already played a part in the initial observations for DESI, which have collected images of more than one billion galaxies using telescopes in the USA and Chile.

These observations covered one third of the visible sky and are essential in selecting the objects DESI will target during its five-year mission.

DESI will be an instrument of the Mayall Telescope in Arizona, USA, and is expected to begin operating in February 2020.

Cosmology and Astronomy at Durham.

Undergraduate and postgraduate opportunities in Physics.