Big honours for two scientists who explore the very small 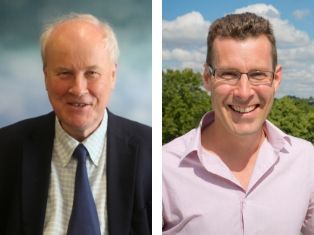 The research coming out of our world-leading Physics Department is changing our understanding of the world around us, from the smallest building blocks of matter to the vastness of the Universe.

So we’re very proud that two of our quantum physicists have received prestigious awards from the Institute of Physics, the UK and Ireland’s professional body for practicing physicists.

Professor Richard Keith Ellis received the Paul Dirac Medal, one of the Institute’s premier awards, and Prof Simon Cornish received the Joseph Thomson Medal, the third consecutive time this award has gone to a Durham researcher.

Keith was honoured for his work in quantum chromodynamics (QCD), where he performed many of the key calculations that led to the acceptance of QCD as the correct theory of strong interaction.

He is Director of our Institute for Particle Physics Phenomenology.

Simon was recognised for his contributions to experiments on ultra-cold atoms and molecules, in particular, the formation of matter-wave solitons and ultra-cold ground state molecules and their interactions.

He is Head of our Quantum Light and Matter research section.