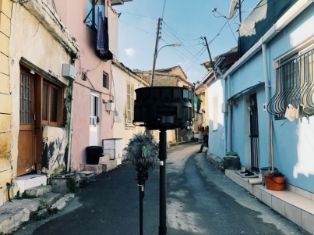 The project documented the UN Buffer Zone in Cyprus

Virtual Reality and 3D modelling have been used to bring some of the world’s hidden areas to life online.

Portraits of No Man’s Land, launched on Google Arts and Culture, allows people to explore parts of the world from former war zones to rebel held territory.

The result is a series of films and visual stories allowing people to visit these historically significant areas of the planet.

Along the way, researchers have captured the stories of local people including farmers in the Western Amazon who live in a former war zone and are now dealing with climate change.

They documented the experience of a political activist and author crossing the barriers that divide Nicosia in Cyprus.

They also spoke to a French mayor who talks about how he is keeping alive villages left unoccupied following WWI.

Visitors can explore the first ever 3D picture of an aeroplane abandoned on the tarmac at Nicosia International Airport in Cyprus.

And the team hasidentified one of the first images of the no man’s land between the WWI trenches, taken by a Scottish nurse, Mairi Chisholm.

The project was inspired by a 6,000-mile expedition in 2015 exploring areas of no man’s land in Europe and Africa.

Our researchers hope that bringing these stories to the world will encourage people to think about challenges we face today like climate change and violent conflict.

The research was co-led by Dr Noam Leshem in our Department of Geography.

The project is a partnership with Royal Holloway University of London.

The work was inspired by the Into No Man’s Land expedition.

Want to study Geography at Durham? Find out more about undergraduate and postgraduate opportunities.