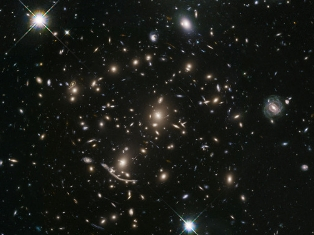 The galaxy cluster Abell 370 was the first target of the BUFFALO survey co-led by Dr Mathilde Jauzac (Credit: NASA, ESA, A. Koekemoer, M. Jauzac, C. Steinhardt, and the BUFFALO team)

A Durham astrophysicist has been named as a rising star of research and innovation for her work on the mysterious substance that makes up a large part of the universe.

Dr Mathilde Jauzac has been appointed as a Future Leader Fellow by UK Research and Innovation (UKRI) for her research into dark matter.

Fellowships recognise up and coming researchers, providing them with funding to tackle big challenges.

Mathilde’s award will allow her to make full use of her observation time on the Hubble Space Telescope to look at distant galaxy clusters to understand more about what dark matter is.

Dark matter makes up about 27 per cent of the universe, but it’s invisible and scientists only know it’s there because of its gravitational effects on galaxies and galaxy clusters.

Researchers believe galaxies like our Milky Way would pull themselves apart as they spin without the constraining gravitational effects of dark matter.

By observing distant galaxy clusters, Mathilde will develop new techniques to look at different wavelengths of light – like infrared, ultraviolet and X-ray light – at the same time to see matter being sucked into the cluster.

By comparing her observations to supercomputer models of the universe created here at Durham, she hopes she can narrow down the likely properties of dark matter.

Durham is home to one of the world’s largest supercomputers used by researchers around the globe to investigate the evolution of our universe.

Mathilde, a member of our Centre for Extragalactic Astronomy and our Institute for Computational Cosmology, is one of 41 Future Leader Fellows announced by UKRI, the national funding body for science and research.

The scheme is supported by a £900m investment fund and also encourages researchers to connect with business.

Mathilde is joint lead of the BUFFALO survey, which is looking to expand the Hubble Space Telescope’s view of largely uncharted regions of the Universe.

Learn more about Astronomy at Durham.

Undergraduate and postgraduate study in Physics at Durham.

Find out more about the UKRI’s Future Leader Fellowships.