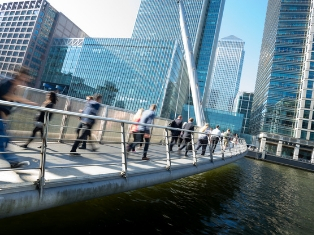 Those educated privately are twice as likely to earn higher starting wages than state educated graduates, according to the study involving Durham University.

Male graduates are also four times more likely to have higher starting salaries than women who also work in these firms.

From this, they looked at 3,260 graduates recruited by 31 leading firms like Goldman Sachs, Barclays Bank, HSBC and PricewaterhouseCoopers.

There was also evidence that overall access to jobs at multinationals had been helped by newer universities.

However, amongst those graduates who work for these leading firms, white, privately educated, men were more likely to earn a higher salary.

At these firms the higher salaries also went to graduates from a core group of universities including Oxford, Cambridge, London School of Economics, Imperial College London and London Business School.

Compared to white graduates working at these firms, those from ethnic groups were likely to earn less.

Graduates from other parts of the UK were also less likely to have a higher starting salary than those from London.

Women were four per cent less likely than men to have a higher starting wage.

The researchers suggested that inequalities at early stages of recruitment could cement long-term patterns in career progression.

Pay inequality among graduates employed by leading firms could be the result of traditional hierarchies and snobbery, they added.

By looking at the paths people have taken to get to top jobs, the researchers hope to increase understanding about why inequalities exist in boardrooms.

Researchers from the University of Bath and Durham co-authored the research, published in the British Journal of Sociology.

The research was part of an Economic and Social Research Council-funded project led by Dr Michael Donnelly at Bath, the Durham researcher was Dr Sol Gamsu.

Find out more about Durham’s Department of Sociology.