Why elite cyclists should talk to astronauts 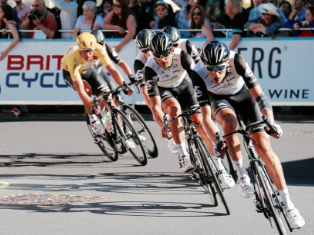 It is well known that the bones of astronauts can become weak from being in space. But did you know that elite cyclists can lose a similar amount of bone density during a racing season?

A new study by our sports science experts has found that something called Relative Energy Deficiency in Sports (RED-S) is the main culprit. RED-S not only puts the cyclists at risk of fragile bones and fractures but can also negatively affect their race results.

However, there is a way to combat this and our researchers have looked at what works.

Their bone density in their lumbar spine (lower back) was also much better compared to the cyclists who kept their diet and training plan the same.

Adequate fuelling before, during and after training sessions made a difference, including intake of protein and carbohydrates within 30 minutes of a session. The strength exercises included a few minutes of multi-directional hopping, which have also be shown to be effective in older people.

However, some cyclists were hesitant to make any changes to their behaviour for fear it would worsen their race results. Our researchers suggest cyclists may need psychological support to overcome these barriers.

Elite cyclists often follow a diet that does not include enough energy for the amount of exercise they do. This can be intentional with the thought that having a low body weight will give an advantage on the bike. However our research shows that this only works up to a point.

Bone formation is limited if the body doesn’t get enough energy and can lead to bone loss and fractures, even from minor falls.

This is why it is important to spot the early warning signs of RED-S so that the athlete can make changes. The approach tested in the study with 45 cyclists, involving a sport specific questionnaire and clinical interview, could be used in other sports as well as dance to assess athletes for RED-S.

Our researchers recommend that clear guidelines are needed for elite cyclists as well as athletes in other disciplines, and have developed a website with more information and support.