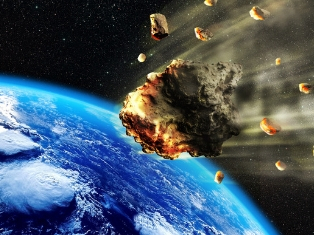 Space is a risky place. Our planet faces a number of potential threats from asteroids and comets to the impact of space weather on vital technologies.

Here Dr Wilman, in Durham’s Department of Physics, explains what the risks are from space and what is being done to limit them.

Q: What are the risks to Earth from outer space?

The main focus is on natural cosmic hazards originating within the Solar System, such as the asteroid and cometary impact hazard. The Solar System contains a large population of rocky and icy debris, ranging from dust-grain sized particles (meteors or shooting stars) to bodies many kilometres in size capable of triggering a mass extinction if they hit the Earth, the best example being the impact that wiped out the dinosaurs 65 million years ago.

Global catastrophes are extremely rare, but impacts from more modest-sized objects are not. In December last year, NASA detected an asteroid explosion over the Bering Sea with ten times the energy released by the Hiroshima atomic bomb. In 2013, a 20 metre asteroid exploded in the atmosphere above Chelyabinsk, in Russia, causing extensive property damage and injuring over 1,000 people, mainly due to flying glass. In 1908, an object several times larger exploded over Tunguska, Russia, and flattened around 2,000 square kilometres of remote Siberian forest – equivalent to the size of London within the M25. Such large impacts are expected roughly once per century, with potential for enormous loss of life and physical destruction if they strike a populated area. Impactors above roughly one kilometre in size – expected once per 100,000 years – would have global reach, triggering tsunamis, earthquakes and wildfires, and lofting vast amounts of dust into the atmosphere, leading to climatic cooling.

Another threat comes from extreme space weather or disturbances in the solar wind – a fast outflow of magnetised plasma emanating from the Sun. Normally, the Earth’s atmosphere and magnetosphere shield us from most of its effects, but explosive events on the solar surface, such as solar flares, can cause bigger impacts. Unlike asteroid impacts, which pose a direct danger to life, the effects of space weather are mostly indirect, impacting critical electrical technologies on the ground and orbiting satellites, including power grids, communication systems, GPS systems and transport. Damage to this infrastructure or major disruptions to the services it provides could have huge consequences for economic output.

Q: How can we guard against these dangers?

We first need to better understand the science underlying natural cosmic hazards, and then take steps to reduce the impacts, if the threat cannot be removed.

The Chelyabinsk event marked a turning point, when an apparently low-level, hypothetical threat became an actual event. Asteroid Day, a UN-sanctioned global awareness campaign, began in 2014 with public endorsement by Nobel Laureates, science and business leaders. As well as increasing public awareness, the campaign advocates the deployment of resources to increase the discovery of near-Earth asteroids by 100 times from the current level of around 1,000 per year. Within a decade, this would help identify the bulk of the million or so Chelyabinsk-sized bodies which could destroy a city.

There are also moves towards better international coordination in surveillance and planning for impacts, as well as the development of fast response technologies to deflect or destroy potential impactors.

For space weather, many of the same principles apply in preparation for what are low probability, but high impact events. In the UK, space weather now features on the National Risk Register as a scenario likely to occur at least once per century, raising awareness and helping policy makers, businesses and insurers to prepare.

Q: What emerging threats might we see coming from outer space?

So far, we have focussed on currently known threats that are part of the Solar System. Casting the net to much larger scales, the risks do not suddenly stop but the timescales on which they might happen become much longer- millions to billions of years. Examples include nearby supernova explosions or Gamma ray bursts elsewhere in the Milky Way, which could cause a mass extinction. To the best of our knowledge, there are currently no precursor candidates for such events sufficiently near the Earth. Nevertheless, we should not be too complacent about the long-term future of human life on Earth, as there are almost certainly dangers we do not currently know about. Indeed, the recent history of observational astronomy has shown that when we look at the Universe in a new way, new phenomena, including potential hazards, come to light.

Speculatively, we might discover signals or phenomena which defy conventional explanation, and which are better attributed to intelligent life elsewhere in our Galaxy. Although traditional approaches to the search for extra-terrestrial intelligence – searching for radio signals transmitted by aliens – have drawn a blank, new facilities, combined with advances in computing, could lead to breakthroughs. While the search for life elsewhere in the Universe would be regarded by most as harmless, the arguably increased chances of making such a discovery has led to renewed concern from some.

Q. What are the main threats from man-made space risks?

These threats mostly centre on ensuring that humanity’s use of space remains sustainable. One major risk is space debris, fragments of defunct or abandoned spacecraft and rockets ranging in size from less than one centimetre up to several metres. At orbital speeds, collisions with even small fragments can cause terminal damage to an operational satellite. As access to space increases, particularly on the commercial front, there is a risk that space debris may grow unchecked, rendering entire orbits unusable.

There is also a growing awareness of risks from intentional threats, including the vulnerability of satellites to direct physical or cyber attack from terrorists or rogue states. Related to this is the threat from state-to-state military conflict in space. The overarching governance framework for space – The Outer Space Treaty of 1967 – was created during the Cold War, and enshrines space as a global commons for the peaceful use of all mankind. In the current era of geopolitical upheaval, the risk of instability and conflict is growing and proposals by President Trump to create a Space Force are one sign of the increasing recognition of this threat.

Q: Will our response to any of these risks spark a new era of space exploration?

Probably not. Space exploration has always been dangerous and expensive, and risks have ultimately been managed and overcome in pursuit of military, commercial or scientific objectives.

If anything, low cost space exploration, spearheaded by private launch companies, has brought certain risks, such as space debris, into sharper focus. It is also giving rise to some new risks; for example, when civilian space tourism begins, it will bring a host of challenges related to the health and safety of fare-paying passengers.

There are also some arcane but potentially far-reaching risks stemming from developments in space mining. Numerous such projects are under commercial development, with formidable technical and financial risks, but there are also legal uncertainties surrounding the ownership of the mined resources. To promote such ventures, the USA and Luxembourg have taken the lead by enacting legislation to recognise space mining as a legitimate aspect of space usage. However, there is a risk that as and when mining begins in earnest, other parties may not recognise this, leading to a breakdown in the international consensus on global space governance.