#BalanceforBetter: A royal celebration of Women, Peace and Security 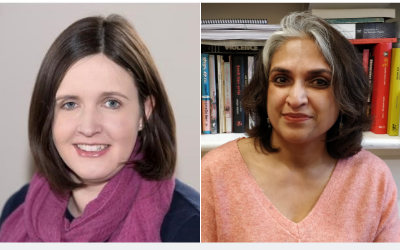 Two of our leading researchers celebrated International Women’s Day at an event in Buckingham Palace to mark 20 years of Women, Peace and Security.

Dr Catherine Turner, from Law, and Professor Nayanika Mookherjee, from Anthropology, are seeking to speed up gender balance and raise women’s voices in the area of international peace and security.

Many women are active and successful local level mediators during violent political conflict, but this expertise is not recognised at international level. The under-representation of women in international peace-making is currently on the agenda of the UN Security Council.

Working with the Foreign and Commonwealth Office and the Geneva Centre for Security Policy, Catherine’s work contributes to policy in this area by examining the legal, political and cultural barriers that women face in accessing high-level mediation positions.

Nayanika’s research within political anthropology looks at sexual violence committed during the Bangladeshi War of Independence, the war crimes tribunal and ‘war babies’ linked to the war of 1971.

It is estimated that over 200,000 (official and contested numbers) women were raped during the conflict and in 1971 the Bangladeshi government designated the term birangonas (brave women) to honour the survivors.

Nayanika has studied the impact of this approach on the affected communities as well as the public memories of these wartime acts of sexual violence.

Working with the Gender Equality team of the Foreign and Commonwealth Office and Research Initiatives Bangladesh (RIB), she has developed a survivor-led guideline and graphic novel to be used by individuals such as human rights activists, teachers, lawyers, journalists and filmmakers.

The graphic novel (in both Bangla and English) is aimed at girls and boys aged 12 and over and looks at what happens when a young girl uncovers a family secret when talking to her mother and grandmother about their memories of the Bangladesh War. Both the graphic novel and the guideline provide guidance for those who record testimonies of sexual violence in conflict.

See our gallery of staff and students celebrating #BalanceForBetter

Have a look at study opportunities in Law and Anthropology