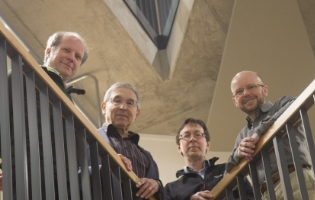 Durham University’s astrophysicists have been ranked joint sixth in the world for the quality and influence of their research in space science.

The Clarivate Analytics Highly Cited Researchers 2018 list also places our astronomers and cosmologists first in the UK and second in Europe for the strength of their research.

Four of our researchers were among 122 worldwide whose work was highly cited by fellow scientists:

This is demonstrated by the production of multiple papers that are cited so often by other researchers that they rank in the top one per cent by citations in the Web of Science portal.

Our researchers are active members of a global community of astrophysicists, cosmologists and space scientists.

With access to supercomputer technology and the world’s most powerful ground and space-based telescopes, Durham’s astronomers and cosmologists are searching for the answers to some of the biggest questions in physics today.

Questions include: How do galaxies form and what effect do black holes have on their evolution? What are dark matter and dark energy? What do galaxies tell us about the conditions of the early Universe? What will be the ultimate fate of the Universe?