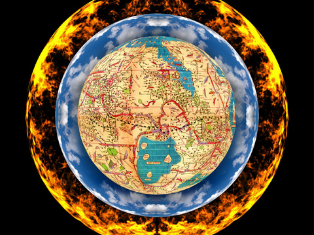 Imagine being able to step back in time and see how a great mind of the past understood our world, or experience how food and drink tasted hundreds of years ago.

Well, research led by Durham University is allowing people to do just that.

Ordered Universe is an international research project led by us, looking at medieval scientific writings with a new, modern understanding.

Determined to reveal the wonders of medieval science and culture to more people, the project team is sharing its research in new, interactive ways.

In January the team took part in the Napa Lighted Art Festival in California, USA.

They worked with creative projection experts The Projection Studio on a digital artwork, which explored human understanding of our place in the Universe, including the ground-breaking works of English medieval scientist Robert Grosseteste.

Working with the Culinary Institute of America the team hosted food and wine demonstrations based on medieval recipes, giving people a real taste of the past.

The team also gave talks exploring medieval thinking and the modern science and art it provokes.

Talks explored the science of the rainbow, the nature of colour, what light is, the history and craft of stained glass, modern glass art and the artistic process.

There was also a reading session with member of the public introducing them to the world and texts of Grosseteste.

Historic thinking to inspire the future

Ordered Universe brings together over 150 team members from across the world.

The project focuses on medieval science and in particular, the works of thirteenth century thinker Grosseteste, who wrote about natural phenomena such as colour, the rainbow, cosmology, comets and the notion of place.

- Find out more about the Ordered Universe project here

All images are courtesy of Ross Ashton and Karen Monid, The Projection Studio