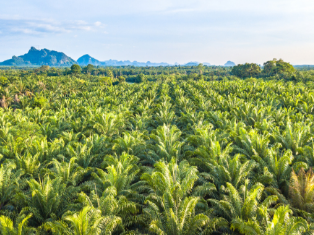 Increasing the use of bioenergy is seen as one of the most important ways in which countries could help to meet climate change targets. However, researchers are warning that this could be just as damaging for global biodiversity as climate change itself.

Familiar UK species that could be affected include red squirrels, hedgehogs and red grouse. Globally, palm oil production is already known to be having a detrimental impact on orang-utan populations.

For more bioenergy to be available there would need to be a huge increase in the amount of bioenergy crops, such as maize and oil palm, being grown.

In a new study, researchers have investigated the potential impacts of land-use change associated with growing more bioenergy crops on all amphibians, birds and mammals across the planet.

They have found that the combination of climate change and large-scale expansion of bioenergy crop growth would together threatened the habitats of around 36% of these species, regardless of whether we continue to emit high levels of greenhouse gases or use biofuels to help reduce emissions.

Limiting climate change has been central to discussions at the recent UN Climate Change Conference in Poland.

The impacts of a growth in bioenergy production are already becoming clear. In tropical regions oil palm plantations are already having a harmful impact on plants and animals. In temperate areas, growing maize in place of other crops has been found to be damaging for farmland birds and mammals.

The researchers argue that relying on bioenergy to meet climate change targets is therefore a no-win situation for biodiversity. Instead, they suggest that there should be more focus on reducing the amount of energy we use so that biodiversity is protected.