Deforestation will have ‘drastic impact’ on South America 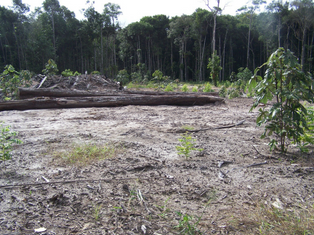 Deforestation of the ‘overlooked’ Guiana rainforests will have drastic impact on the rainfall patterns that support ecosystems and livelihoods across South America, warn scientists from Durham and other UK universities in a new report.

The Guiana Shield rainforests are at the northern boundary of the Amazon rainforest and cover parts of northern Brazil, southern Venezuela, eastern Colombia and all of Guyana, Suriname and French Guiana.

Despite its size - 1.3 million sq km of near continuous tropical forest - Guiana Shield has been largely overlooked by climate researchers in favour of the Amazon Basin. As a result, little climate data exists for the region.

Now, scientists from across the UK have quantified the likely impact that deforesting less than a third of the Guiana Shield, in areas under threat from mining, logging and agriculture, would have on the climate of South America.

The researchers describe the scenario as realistic, given the extensive deforestation that has already occurred along the Amazon’s southern margin.

Dr Isabella Bovolo, a climate modelling expert in the Department of Geography at Durham University, said: “The Guiana Shield, at the northern boundary of the Amazon, is located at the start of two atmospheric rivers that carry moisture across South America.

“The Guiana Shield is therefore a sensitive hotspot which, when disturbed even on a small-scale, can affect hydro-climatics 1,000 km to the west and 4,000 km to its south.

“Our climate simulations suggest that if less than a third of the Guiana Shield is deforested, rain and runoff would more than double in lowland forests, increasing the likelihood of flooding.”

Dr Geoff Parkin from Newcastle University said: “Forests in Venezuela and Brazil would also experience an increase in rainfall by up to 25%, severely impacting remote, indigenous communities, food supply and ecosystem stability.

“Mean annual temperatures could increase by up to 2.2 degrees Celsius in the northern savannahs, and that nearly two-thirds of the Amazon would experience longer and more severe droughts.”

Dr Ryan Pereira from the Lyell Centre at Heriot-Watt University said that “The intensification of climate variability across the continent will also affect the more populous areas in the south and east of South America, directly impacting food production in one of the largest food and crop producing areas of the world.”

The findings, reported in the journal Environmental Research Letters, include a warning about the current threats facing the Guiana and the need for vigilance around its deforestation.

The researchers are calling for an international effort to better understand and sustainably manage the Amazonian biome across national boundaries.