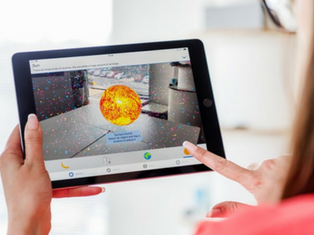 Neutrinos are one of the most important and common subatomic particles in the Universe. They are produced by many natural sources and trillions of them pass through our bodies unnoticed every second.

But neutrinos are also one of the most mysterious particles in existence.

Neutrinos have no electric charge, so scientists cannot use electric or magnetic forces to capture them. This makes them nearly impossible to see and detect. These ghostly particles can float through solid matter without a trace.

However, physicists studying neutrinos believe they may hold the key to some of the Universe’s greatest secrets, such as how the Universe evolved since the Big Bang, leading to the stars and galaxies that we are familiar with.

Now a team of physicists, led by the Institute for Particle Physics Phenomenology (IPPP) at Durham University, are hoping to inspire people to learn more about neutrinos, with an innovative app and an exhibition at a leading UK science festival.

Experts from the IPPP, which is funded by the Science and Technology Facilities Council, have teamed up with innovation specialists, Cambridge Consultants to develop a novel app which uses augmented reality to help users understand more about neutrinos, visualise where they are produced and show why they are so significant to modern science.

Users can enter an ‘interactive’ mode which projects animated sources of neutrinos onto a flat surface, explaining key facts and behaviours. Neutrino sources that the app displays include everything from a power station to a banana.

The app also shows neutrinos superimposed onto the world around them, allowing users to ‘see’ sources create particles in front of their eyes.

The app will form part of an exhibition that the IPPP is hosting, together with Queen Mary University of London and nine partners, at this year’s Royal Society Summer Science Exhibition in London. The event, which runs from 2-8 July 2018, showcases cutting-edge UK science.

Entitled ‘Ghosts in the Universe’, the exhibition aims to engage visitors in the physics of neutrinos and how they could hold the key to the apparent absence of antimatter from our Universe, which remains one of the big unsolved mysteries in physics.

Antimatter is made of particles which have charges opposite of normal matter. At the origin of the Universe, matter and antimatter should have been created in equal amounts, and yet almost everything is now only made of matter. So what happened to all the antimatter after the Big Bang?

Evidence is building to suggest that the neutrino may play a key role in tipping the antimatter-matter balance. Experts at the IPPP are part of the European Research Council (ERC) NuMass project, which aims to understand the origin of neutrino masses and the differences between neutrinos and antineutrinos. The project aims to unveil a new theory of particles and interactions at low energy, which would open a completely new perspective on the fundamental laws of nature.

Professor Silvia Pascoli, from the Institute for Particle Physics Phenomenology, Durham University, and Principal Investigator of the ERC NuMass project, said: “Neutrinos are vitally important and have the potential to solve some of the biggest mysteries in physics, including why everything we see in the Universe is made of matter, not antimatter.

“Despite this, they are poorly understood. Through our partnership with Cambridge Consultants we have been able to develop a unique app which will transform teaching techniques in this area.

“We hope that the app, and our exhibition at the Royal Society Summer Science Exhibition will encourage people to learn about the incredible world of particle physics and the exciting work we are doing to better understand the neutrino.”