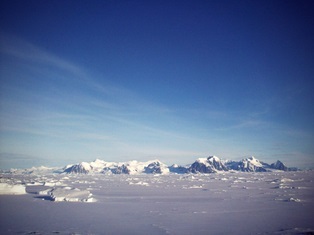 The West Antarctic Ice Sheet was able to re-grow after shrinking but the process is not fast enough to combat the impact of today’s climate change, according to research involving Durham University.

The research, published in Nature, suggests that around 10,000 years ago the West Antarctic Ice Sheet shrank to a size even smaller than today but managed to re-grow to its current size thanks to uplifting of the seafloor as the weight of the ice became less.

However, the uplift process takes thousands of years so is unlikely to work quick enough to save today’s ice sheets from melting and causing seas to rise, which is happening at a much faster rate.

The international team of scientists say their results could help to refine predictions about how today’s warming climate will impact polar ice and sea-level rise over longer timescales – over thousands of years.

Since the end of the last Ice Age around 15,000 years ago, the earth has been warming, the seas rising and the ice sheets generally getting smaller. The current study found that the West Antarctic Ice Sheet shrank more than anyone suspected with its leading edge retreating 200km further inland than where it is today. Since retreating, the findings show it managed to re-grow.

The team used ice-penetrating radar to see deep inside the ice and carried out radiocarbon analysis of sediment from beneath the ice to tease out evidence for the smaller-than-present ice sheet. A new series of computer models helped to shed further light on the reason for their unexpected findings.

It is not yet clear how common this rebound process is. The team found evidence for it in two sectors of Antarctica’s western ice sheet but simulations suggest that re-growth has not happened in the rapidly melting Thwaites Glacier.

The researchers stress that this rebound process cannot be relied on as a solution for modern-day rising sea levels as it won’t help re-grow the ice sheet until long after coastal cities have felt the effects of sea-level rise.

Co-author Dr Pippa Whitehouse from Durham University’s Geography Department, said: “What we don’t currently know is the speed of the rebound process, and hence the time at which any future re-growth could kick in.

“To get a better handle on this, we have GPS instruments deployed across Antarctica measuring the rebound that is being triggered by current melting.”

Professor Jonathan Kingslake from Columbia University’s Lamont-Doherty Earth Observatory commented: “If you pile up a bunch of ice on the earth’s crust, it bends down. Remove it and it pops back up. We think that over thousands of years, as the ice sheet shrank, the crust in this area popped back up and the grounding line moved back out.

“The hopeful news of the study is that when the ice sheet retreated at the end of the last Ice Age it pulled back beyond the current configuration, yet did not reach the point of unstoppable collapse, meaning that there may be time before that tipping point is reached.”

The West Antarctica Ice Sheet is of particular interest to scientists studying climate change as it is the last ice sheet on the planet resting in a deep marine basin and is the most likely player in any future, rapid sea-level rise.

The team stumbled upon a key part of the discovery by accident during a trip to Antarctica studying ancient ice flows whilst towing a radar device over the ice near the Weddell Sea. Just before they headed back to camp, the radar spotted something strange hundreds of metres below where the ice sheet meets solid ground. Further in-depth analysis by the team led to the findings published today.

In other research, also involving Dr Pippa Whitehouse, a team of international scientists found that ice losses from Antarctica have increased global sea levels by 7.6 mm since 1992, with two fifths of this rise (3.0 mm) coming in the last five years alone.

The findings are from a major climate assessment known as the Ice Sheet Mass Balance Inter-comparison Exercise (IMBIE).