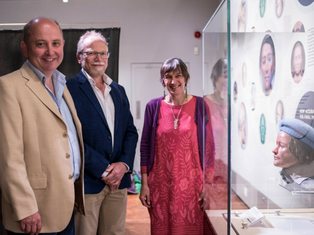 The story of the Seventeenth Century Scottish soldiers, whose remains were discovered in two mass burial sites in Durham City in 2013, is the subject of a major new exhibition at Durham University’s Palace Green Library.

The exhibition, entitled Bodies of Evidence: How Science Unearthed Durham’s Dark Secret, shows how a multi-disciplinary team led by the University’s world renowned Department of Archaeology used a range of scientific and documentary research to identify the remains as those of the Scottish soldiers, who were captured at the Battle of Dunbar in 1650.

The exhibition explains how archaeologists used detailed scientific analysis of the remains, alongside study of historical documents from the period to establish details about the soldiers’ lives including where they were born, what their health and diets were like and why they died.

Professor Chris Gerrard, of Durham University’s Department of Archaeology, who has led the research into the remains, said; “The remains of up to 28 individuals were excavated in 2013.

“It was the start of many months of research which led us to identify them as Scottish soldiers who were captured by Oliver Cromwell’s army after the Battle of Dunbar and imprisoned in Durham Cathedral at a time when it was not used for worship.

“The discovery of the remains, and the research into them, has put an end to almost 400 years of mystery surrounding what became of those soldiers who died here in Durham.”

Visitors to the exhibition will also have the chance to view a 3D model of a computer-generated facial reconstruction of one of the soldiers. The computerised reconstruction, which was unveiled in late 2017, was created by experts at Face Lab, part of Liverpool John Moores University, working in partnership with the Durham University project team.

The facial reconstruction was created using scans of one of the excavated skulls, along with evidence provided by the team at Durham’s Department of Archaeology.

Julie Biddlecombe-Brown, Curator at Palace Green Library, said: “This is the first opportunity visitors to the museum will have to come face to face with this young man who we know was aged between 18 and 25 when he died here in Durham.”

The exhibition also examines what life was like for soldiers and civilians during the civil wars in the 1600s. The stories of survivors of the Battle of Dunbar are also told, including those who were sent to the USA to work as indentured servants, many of whom have descendants alive today.

Julie Biddlecombe-Brown continued: “These were real men who lost their lives and their place in history and, through this exhibition, we want to tell their story and give them back their voices.”