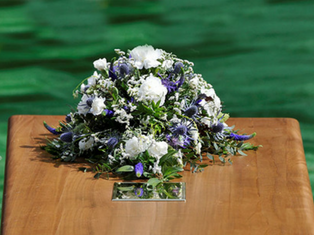 The remains of Seventeenth Century Scottish soldiers, discovered during construction work at the University’s Palace Green Library in 2013, have been reburied in Durham City.

The remains of the soldiers, who were imprisoned and died in Durham following the Battle of Dunbar in 1650, were laid to rest at Elvet Hill Road Cemetery, less than a mile from the original exhumation site on Palace Green, part of the city’s UNESCO World Heritage Site.

A simple graveside service was held and the remains were reburied in a bespoke casket. Both the service and casket were intended to reflect the traditions of the Seventeenth Century.

During the reburial service attendees were given the opportunity to scatter a handful of Scottish soil into the grave, in acknowledgement of the origins of many of the soldiers.

Professor Chris Gerrard, of the Department of Archaeology, said: “It has been a privilege to research these soldiers and, having learnt so much from their remains, it was important to us to lay them to rest with respect and dignity.

“Today we are able to give these men the burial they were denied when they died almost 400 years ago.”

The reburial service was designed by Durham Cathedral, and representatives from the Church of Scotland and the Scottish Episcopal Church were invited to comment, to ensure a respectful and dignified final committal.

Metrical Psalms from the 1650 Scottish Psalter and a Bible reading from the 1611 King James Version were included in the service, to ensure it reflected the traditions of the Seventeenth Century.

Canon Rosalind Brown, Durham Cathedral, said: “The simple graveside ceremony not only reflects the traditions of the Seventeenth Century but is also respectful of the circumstances that led to these men dying in Durham.

“The service draws on the liturgical materials principally from Scottish traditions and the rites of the Church of Scotland, and in a spirit of ecumenism and reconciliation, honours the memory of the soldiers and commends them to God.”

Speaking about the decision to have a graveside service, rather than a service in Durham Cathedral, Canon Rosalind Brown said: “A service in an Anglican church, and in particular a service within Durham Cathedral, would be inappropriate given the history of these men and the fact that, although not used as a place of worship at this time, the Cathedral represented a place of imprisonment for them.”

The reburial service was open to all and Durham University invited groups and individuals who have taken an interest in the project, together with community representatives from Dunbar and Durham, and academics who undertook research on the remains, to attend the service and pay their last respects.

“Here lie the remains of those Scottish soldiers from the Battle of Dunbar who died in Durham 1650-1651, were excavated from Palace Green Library in 2013, and were reburied here on 18 May 2018.”

Piecing together the soldiers' stories

Following discovery of the remains in November 2013, analysis by experts from the University’s Department of Archaeology concluded that they were those of Scottish soldiers taken prisoner after the 1650 Battle of Dunbar, solving a centuries-old mystery about what became of those soldiers who died in Durham.

The reburial follows the completion of research work on the remains, led by the Department of Archaeology, which has so far revealed fascinating details about the early lives of the soldiers and their health.

Professor David Cowling, Pro-Vice-Chancellor (Arts and Humanities) at Durham University, said: “Through the discovery of these remains, and the research on them, we have been granted a privileged insight into the lives of the soldiers.

“The research findings are helping us to piece together the story of their lives.

“Through this work we hope to give a voice back to these individuals, who were captured at the Battle of Dunbar before being held prisoner, and sadly dying, here in Durham.”

The full findings from the research programme are due to be published later in 2018 and a small sample of teeth has been retained from the skeletons to allow for future research as new techniques and opportunities become available.

The Battle of Dunbar was one of the shortest and most brutal battles of the Seventeenth Century civil wars. In less than an hour the English Parliamentarian army, under the command of Oliver Cromwell, defeated the Scottish Covenanting army who supported the claims of Charles II to the Scottish throne.

After the battle thousands of soldiers were marched over 100 miles from the South East of Scotland to Durham in North East England. Around 3,000 soldiers were imprisoned in Durham Cathedral and Castle, at a time when the Cathedral was empty and abandoned.

An estimated 1,700 prisoners from the battle died and were buried in Durham.

Those that survived imprisonment in Durham were transported to different parts of the world including France and New England, USA, where they worked as indentured servants.

Full details of the Scottish Soldiers Archaeology Project are available on line here.