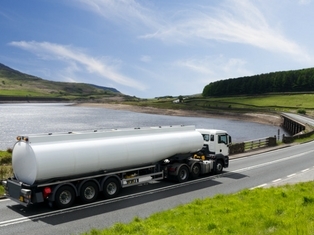 Strict controls would be “a necessity” to minimise the risk of spills and leaks from any future UK shale gas industry, according to new research.

The recommendation comes from scientists who have investigated the possible risk of spills from well sites and tankers used to transport chemicals and contaminated fluids to and from fracking sites.

The research, by the ReFINE (Researching Fracking in Europe) consortium, jointly led by Durham and Newcastle universities, estimated the potential for spills from any future UK shale gas industry by examining data related to the UK’s milk and fuel transportation industries and from the oil and gas industry in parts of the USA.

Tens to hundreds of well sites might be needed in the UK, with hundreds to thousands of wells being drilled over several years to extract shale gas.

Scientists looked at the number of incidents – such as road traffic accidents - and spills involving tankers in the UK’s fuel and milk industries as a comparator for any future UK shale gas industry.

A shale gas well site containing 10 wells could expect to be visited by an estimated 2,856 tankers, each with a potential capacity of 30,000 litres, over the first two years of drilling, the researchers said.

Data relating to milk tankers showed this volume of traffic could potentially equate to one incident for every 12 shale gas well sites and one spill for every 19 well sites over the lifetime of a well (up to a period of 20 years).

Milk transportation was included in the study because it is comparable with a potential shale gas industry, as many well sites could be situated in rural areas with tankers using similar roads.

Additionally the dairy industry is a good comparator as, similarly to potential fracking related spillages, milk tanker spillage can be highly polluting to natural ecosystems. For example, in July, 2002 a tanker crashed into a bridge and 19,000 litres of milk was spilt into a stream in Staffordshire, UK. It was reported that 50,000 fish were endangered.

Data relating to fuel industry tankers suggested there could potentially be one incident for every 29 shale gas sites developed and one spill for every 55 sites over the lifetime of a well site.

Information about milk/fuel tanker incidents between 1998 and 2016 was collected using online media reports and therefore could be understated if not all incidents were reported in the press, the researchers said.

Based on data from Texas, USA, the researchers also found that one onsite spill could potentially occur for every 16 UK well sites, each containing 10 wells.

The findings are published in the journal Science of the Total Environment.

Hydraulic fracturing – or fracking – is carried out by injecting a mixture of water, sand and chemicals at high pressure into rock which then cracks to release the shale gas. Generally chemicals are stored on site before being mixed with the water and sand. The mixture that has been pumped into the ground is often taken away by tankers for treatment after use.

Spills of fracking fluid, produced water, flowback water and chemicals are potentially hazardous if they enter natural ecosystems. One previous study reported a case in the USA of fracking chemicals leaking into a waterway causing death or injuries to fish, though there was no control to know what would have happened if a spill had not occurred.

The leading causes of fluid spills from well sites in Texas were equipment failure, rust and human error, the researchers said.

Previous research into commercial road transport has also shown that long journeys, driver fatigue, time pressures, and unsuitable roads, such as country lanes made worse by bad weather or heavy traffic, could contribute to accidents and spills, the researchers added.

Lead author Sarah Clancy, a PhD student in the Department of Earth Sciences, Durham University, UK, said: “There is currently no shale gas production within Europe, but exploration wells are underway and the public has expressed concerns about the effects on the environment including the potential for leaks to pollute land, surface water and groundwater.

“Given the highlighted risks of spills from shale gas operations, mitigation methods are a necessity.

“If a shale industry is to go forward in the UK, or across Europe, appropriate strategies need to be in place to minimise the risk of spills associated with well site activities and the transportation, handling, storage and disposal of hydraulic fracturing related fluids.”

For example, to mitigate against spills on the road the researchers highlight the importance of regular vehicle inspections and maintenance; specialised training and instruction for drivers; and appropriate driving schedules and routes.

Informing government, industry and the public

Professor Richard Davies, Newcastle University, who leads the ReFINE project, said: “Our research on shale gas continues to follow up on the questions members of the public have raised about fracking. Our new research informs government, industry and the public on how likely spillage would be.

“This is timely as fracking is now recommencing onshore in the UK after it was halted because of fracking-induced earthquakes in 2011.”

The research work was part of a larger project called M4ShaleGas (Measuring, Monitoring, Mitigating and Managing the environmental impact of shale gas), funded by the European Union’s Horizon 2020 Research and Innovation programme.

ReFINE is led jointly by Durham and Newcastle universities and is primarily funded by Ineos, with contributions from the Natural Environment Research Council, Environment Agency and the EU.