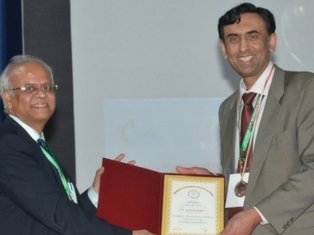 A chemist whose research is helping to harvest clean drinking water and has waterproofed millions of mobile phones has been awarded a major international honour.

The award recognises the pioneering work of Professor Badyal’s research group at Durham in developing waterproof nanocoatings for technological and societal applications.

Professor Badyal is particularly interested in the application of his research for both the commercial market and to help those living in poverty.

His research has led to the development of innovative waterproof nanocoatings to protect a range of consumer goods and bioinspired technology to help collect fog for clean drinking water in developing countries.

Professor Badyal’s waterproof coatings technology was commercialised by British firm P2i Ltd and has gone on to protect over three million pairs of footwear, 100 million smartphones, and over 75 per cent of the world’s hearing aids.

Speaking about being the recipient of the CRSI International Medal 2018, Professor Badyal said: “I am extremely proud to receive this award and honoured that the work of my research group has been recognised by the Chemical Research Society of India.

“Our work to invent a range of novel surfaces has a number of technological and societal applications including fog harvesting for clean drinking water in developing countries, antibacterial surfaces, and liquid repellency for the water protection of smartphones.”

Professor Badyal was presented with his award after his lecture to the 22nd National Symposium of the Chemical Research Society of India, at Pandit Ravishankar Shukla University, Raipur. The conference, which ran from 2 to 4 February, was a joint event between the CRSI and the UK’s Royal Society of Chemistry.

Professor Narayanasami Sathyamurthy, President ofThe Chemical Research Society of India, said: “The CRSI has a tradition of honouring some of the outstanding chemists of Indian origin working outside India by awarding the CRSI Medal each year.

“The CRSI Medal for the year 2018 goes to Professor Jas Pal S Badyal, FRS, of Durham University, UK for his outstanding contributions to surface chemistry in the form of functionalising nanolayers and realising its potential for commercial applications that are of immediate use for the common man.”

Three successful start-up companies have been set up to commercialise patented research from Professor Badyal’s laboratory including P2i Ltd which was awarded the 2015 International Business Award for ‘Most Innovative Company in Europe’.

In 2016 Professor Badyal was elected as a Fellow of the Royal Society in recognition of his pioneering research on the functionalisation of solid surfaces and use of nanolayers.

Chemistry at Durham University is ranked in the top 100 in the QS World University Rankings by Subject 2017.