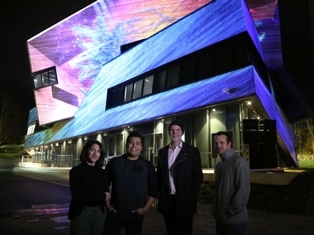 Durham University is one of the world’s leading centres for research into the origins and evolution of the Universe.

Cosmologists working on the EAGLE Project use a huge supercomputer to create remarkably lifelike simulations of the Universe which are then compared to the real thing by astronomers through their telescopes to further our understanding of the Universe and to learn how it evolved to become what we see today.

The work of EAGLE is behind three of the installations at Lumiere 2017 - What Matters, Cosmoscope and Cosmic Architecture, which visitors will see projected on to the award-winning Ogden Centre for Fundamental Physics.

Tell us about your work.

My job is to make universes – which is not a bad job at all!

We take the laws of physics, and programme that into the supercomputer along with a few other ingredients such as those needed to form stars.

We then see if we can create a Universe that looks like the one we see through telescopes.

What is the EAGLE Project?

EAGLE (Evolution and Assembly of GaLaxies and their Environments) is a project that we have been working on for about five years. It’s a collaboration primarily between Durham University and Leiden University in The Netherlands.

Together we come up with new ways of trying to implement the laws of physics that are more accurate than people have been able to do in the past, using computer modelling.

We have been able to produce a Universe which compares remarkably well with the one that astronomers would look at through a telescope.

I often show astronomers galaxies that we’ve made in the simulation and they spend ages discussing if this was one they’ve seen before. Eventually I point out that can’t be true because it only exists in the computer in Durham.

Is there a connection between simulating the Universe and art?

Physicists are not just people that work with mathematics and equations. We want to try and understand what’s really there.

What better way to understand what’s really there than to be able to sit inside the Universe that we have created in the computer?

But maybe it goes even deeper than that? Can we imagine what it would be like to be an astronomer in this Universe? What would you see? How would you perceive the Universe around you?

This has become an artistic endeavour to try and capture that feeling of being out there in the Universe.

EAGLE is behind three installations at Lumiere 2017. How did this come about?

We were approached originally by the organisers, Artichoke, in 2015.Their director, Helen Marriage, was looking for something new to project on to the Cathedral. She had seen the tour of the Universe we had created and wondered if we would be interested in helping artists in doing something similar.

That’s how The World Machine came to be, which was projected onto the Cathedral then, and this got us very inspired to do more work like that.

Helen brokered connections between three more groups of artists and I’ve talked to them about cosmology and the cosmos by showing them the simulations we’ve produced through EAGLE to inspire the work that they’ve gone on to do.

This year’s work draws on EAGLE in various different ways; for instance projected on to the Ogden Centre for Fundamental Physics will be an artistic impression the cosmos, called Cosmic Architecture, which will use, in part, the images we have created from EAGLE and other cosmological observations of the real Universe.

What Matters at St Oswald’s Church will be an artist’s impression of how the Universe is created, taking inspiration from pictures of the cosmic microwave background, that first glimpse of the Universe. The artists began to wonder whether they could capture an impression of this in shattered glass, which reflects the colours and light in different ways and creates a beautiful impression.

I’ve also worked a lot with Simeon Nelson in creating Cosmoscope. Cosmoscope tries to capture the nature of the Universe in a more abstract way and it’s very interested in the scales and rhythms of the Universe. Simeon worked with people ranging from those studying the atomic structure of materials up to our work in the cosmos. The idea is that humankind is in some way centred between the biggest scales of the cosmos and the smallest scales of atoms. Simeon has tried to capture this in the size and scale of the sculpture, but also in its detail. It will be a fascinating compression of the scale of the Universe.

It’s very, very exciting to see the work we do inspiring artists who then take that in different directions to interpret our research in many different ways.

(More about University related installations can be found here.)

Is art a good way of connecting people with your research?

Definitely. To step back from the detailed formula and lines of computer code and ask what it all means while creating an exciting experience, a visual impression, with a story behind it that is embedded in science, is a fantastic opportunity.

It’s a way of engaging people that lines of computer code simply doesn’t do. It’s been a fantastic opportunity to work with the artists in this way.

A number of postgraduate students have been involved in creating the installations at Lumiere. What has the experience been like for them?

It’s been tremendous for the students. They love making discoveries in astronomy, but this is an avenue for them to tell people about the work they do. They have loved this opportunity.

I’m always amazed at how much extra effort they will put in to creating new things, often on very short, demanding timescales. It’s been really fantastic to see their scientific work expressed in art and making that connection with people.

It’s true of everyone working in our area that they want to tell you about the cosmos. They are working on it not just for themselves, but also to tell humanity about the ultimate human story.

Do you hope your work with Lumiere will help engage people in cosmology, astronomy and physics?

I hope it will. Certainly when I was at school there was a feeling that you did art or you did mathematics. I really don’t understand that distinction.

There is beauty in art and there’s beauty in mathematics and physics. There’s also mathematics and physics in art and the two are really just different aspects of the same thing. If we can achieve a greater merging of this and a greater feeling that you don’t have to be good at one and not the other, then that would be such a good thing to achieve.

What next for EAGLE?

The next steps are really to try and make the Universe we are creating even more realistic. We would like the galaxies that we create to have more detail in them. When we compare them to telescopes now they look quite like a real galaxy, but to an expert eye you begin to realise this or that feature is not quite right.

Our concern is that maybe those things that seem to be detailed have an important story for us to learn from. If we could achieve more detail we could learn much more about the cosmos.

A very interesting aspect that we are now also working on is what it is we can learn about the future of the Universe.

Finally, what future discoveries might people see at Lumiere in 10 years’ time?

There could be many different things such as understanding more about parallel universes; the idea that there isn’t just one reality, but parallel realities that are all in some way linked, but not completely connected so we are not really aware of them.

It would be fascinating to see people being able to explore that idea at Lumiere in the future. I would hope we will be there leading the scientific edge to that.