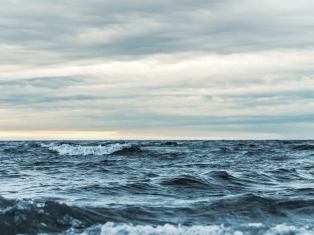 A team of scientists, including experts from Durham University, has discovered that sediment avalanches occurring deep under the ocean are far more frequent and long-lasting than previously thought.

The team, led by Dr Matthieu Cartigny, Professor Peter Talling, Dan Parsons, and Mike Clare, and their respective groups at Durham University, the University of Hull and the National Oceanography Centre (NOC), have been examining the first direct measurements of deep-water sediment avalanches, called turbidity currents.

These powerful flows occurred 2,000 metres under the ocean’s surface within the Congo Canyon, offshore West Africa, which connects the world’s second largest river to the deep-sea. Such flows can damage and break important seafloor infrastructure that underpins global digital communications, but until now it has been unclear as to how often these offshore flows occur and how large they can be.

The team’s work on these powerful seafloor flows reveals they carry globally significant volumes of sediment into the deep sea over week-long timescales, as well as large amounts of organic carbon. This transport of material to the deep-ocean supports seafloor ecosystems and contributes to the regulation of climate change through the long-term burial of organic carbon.

These findings led to a new model of how these vast flows work and have been published in leading journal Science Advances; a paper by Maria Azpiroz-Zabala of NOC and colleagues.

Previously, turbidity currents have been difficult to monitor because of their location, unpredictability and their capacity to severely damage instruments placed in their path. Research was therefore limited to a laboratory setting because the technology was not sufficiently robust to withstand the destructive force of the currents.

The new measurements were originally acquired to understand the risk posed to seafloor structures, however, they have also provided the first detailed view of how turbidity currents behave in the real world.

Professor Parsons, of the University of Hull, said: “Technology is now allowing us to be able to measure within these vast underwater canyons and detail their flows at a full scale. This means we can now discover in greater detail how these currents behave, their structure, and what real-world implications this may possibly have. Until recently, this has not been possible.”

Professor Talling, of Durham University, added: “Just one of these submarine flows can carry more sediment than all of the world's rivers combined. They are notoriously tricky to measure in action. I never thought we would see such a data set in my lifetime.”

“Until now, we have not fully understood the threat posed by such powerful deep-sea turbidity currents to seafloor structures. This is a blind-spot for global seafloor networks, which provide energy supplies and communication links, underpinning our day-to-day lives”, said Dr Mike Clare of NOC. “Our new findings show that pipelines and cables must be designed to withstand many days of impact, rather than minutes to hours as previously thought.”

Dr Steve Simmons, of the University of Hull, added: “The technology includes Acoustic Doppler Current Profilers (ADCPs) which are like underwater speed cameras and measure water current velocities over a depth range using the change in pitch of ultrasonic sound scattered by moving particles within the water column. By analysing the strength of the scattered sound we can also quantify the volume of sediment being transported by these flows.”

Researchers worked at a depth of 2km in the Congo Canyon using the ADCPs, which were suspended 66-85m above the sea floor.

The flows were measured at two sites.

Researchers discovered that, in the Congo Canyon, individual currents stretched as they go down the canyon, and they flowed for over a week, rather than the hours and minutes previous research had suggested.

They discovered the internal structure of the currents in the Congo Canyon were significantly different to the standard model for these flows developed in the laboratory-based research.

Previously, it was thought currents comprised of a slower unsteady flow (the head) followed by a steadier flow (the body) then it peters out (the tail). With the feaster flowing body of the flow feeding and pushing the head along.

However, researchers discovered a difference in this basic structure in the Congo Canyon.

Dr Esther Sumner, said: “The head of the current actually shoots off like a racing car. It leaves a vast concentrated cloud of sand behind. Because the ‘engine’ of the current shoots off, it picks up sand and mud from the sea floor and self-perpetuates itself. As it moves down the canyon the currents get longer and longer and effectively stretch from being a few hours long in the upper canyon to being weeks in length down system.”

Professor Parsons added: “This is really significant in how effective carbon burial is in the deep sea. These currents are known to transport globally significant amount of organic carbon into the deep sea – but how this is buried and locked away as part of the carbon cycle remains largely unquantified.”

The team have just been awarded a Natural Environment Research Council grant to continue the work and over the next four years the team will continue to monitor these flows offshore Congo, where a submarine channel stretches out on the seafloor for over 1200 km in length to over 5,000 m water depth.