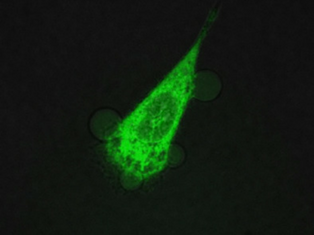 Motorised molecules driven by light have been used to drill holes in the membranes of individual cells, including cancerous ones. The technique shows promise for either bringing therapeutic agents into the cells or directly inducing the cells to die.

Dr Robert Pal at Durham University worked with researchers at Rice and North Carolina State universities in the USA to demonstrate in laboratory tests how rotors in single-molecule nanomachines can be activated by ultraviolet light to spin at two to three million rotations per second and open membranes in cells.

Test motors designed to target prostate cancer cells broke through their membranes from outside and killed them within one to three minutes of activation, said Dr Pal.

The cells showed increased blebbing ­– bubbling of the membrane. This effect can be seen, in the image above, as bulges from the small dark spots on a human prostate cell (stained green), which is under attack by motorised molecules.

Dr Pal, of the Department of Chemistry and Biophysical Sciences Institute at Durham University, thinks that nanomachines could prove to be effective against a range of cancers including those that resist currently available treatments.

“We are moving towards realising our ambition to be able to use light-activated nanomachines to target cancer cells such as those in breast tumours and skin melanomas, including those that are resistant to existing chemotherapy,” said Dr Pal, a Royal Society Research Fellow.

“Once developed, this approach could provide a potential step change in non-invasive cancer treatment and greatly improve survival rates and patient welfare globally.”

Dr Pal collaborated with research teams in the USA led by Professor James Tour at Rice University in Houston, Texas, and Assistant Professor Gufeng Wang at North Carolina State University. Details of the study are published in the academic journal, Nature.

The research used motors based on work by Nobel laureate Bernard Feringa, who won the prize for chemistry in 2016. The motor itself is a paddle-like chain of atoms that can be prompted to move in a single direction when supplied with energy.

Properly mounted as part of the cell-targeting molecule, the motor can be made to home in on specific cells and spin when activated by a light source.

Tests on live cells, including human prostate cancer cells, were conducted at Durham. These experiments showed that without an ultraviolet trigger, motors could locate specific cells of interest but stayed on the targeted cells' surface and were unable to drill into the cells. When triggered, however, the motors rapidly drilled through the membranes.

Researchers expect the rotors may eventually be activated by other means, such as two-photon absorption, near-infrared light or radio frequencies, which would pave the way toward the establishment of novel, easy and cost-effective photodynamic therapy.

The research was supported by the National Science Foundation, North Carolina State University, the Royal Society and the Biophysical Sciences Institute at Durham University.

Dr Pal and his research colleagues explain more about their work in a video produced by Rice University.