In April 2015 parts of Nepal were devastated by an intense earthquake and significant aftershocks. But the danger to human life and livelihoods doesn’t end when the ground stops shaking. Earthquake-triggered landslides present an immediate and long-term threat in mountain environments, compounding the difficulties for those affected.

So what causes the continued threat of landslides? How can experts assess the risk of one happening and how do communities respond to these dangers? A team from Durham University’s Department of Geography are undertaking two research projects to help answer these questions.

The first research project monitors ground movements in Nepal to assess the ongoing risk of landslides and the impact that the current monsoon season may have. Led by Dr Nick Rosser, who works in the Department of Geography and the Institute of Hazard, Risk and Resilience, the team travelled to Nepal in August 2015 to install equipment at 10 locations across the earthquake affected region, where cracks have opened across mountain-sides following the earthquakes earlier in the year.

The equipment will measure whether these areas are becoming more unstable, which may imply future landslides, as well as capturing how they respond to seismic activity from aftershocks and monsoon rainfall. Data will be recorded and transmitted to a web-site for the research team to analyse in Kathmandu and Durham.

Dr Rosser said: “Capturing data after the Nepal earthquakes will enable us to understand whether damaged mountainsides are continuing to move, what is driving this and whether this poses a risk for local communities.”

The team will work with local communities and Nepali scientists, including the National Society for Earthquake Technology (NSET) as Dr Rosser explained: “The research is about more than just the physical processes that can cause landslides. Our research team includes social scientists who will work with the local communities to draw on their local knowledge of the evolving landslide hazard, to explain the purpose of our work and understand how those living in these high-risk areas adapt to the dangers posed by landslides.

“We are building on our long-established partnership with NSET-Nepal, a leading national non-government organisation in earthquake risk reduction in developing countries.

“Longer term we would like to use our findings to help develop landslide early warning systems to help reduce the risks not only to people’s lives but to their homes and livelihoods, particularly in the immediate aftermath of large earthquakes.”

This research, which is funded through the Natural Environment Research Council’s Urgency Grants scheme, could help guide disaster response efforts by identifying when areas may need to be evacuated due to landslide risk. It could also inform policy decisions in at-risk areas to reduce the impact of future landslides on communities.

The second research project that Dr Rosser’s team are working on is continuing vital landslide mapping, which started immediately after the earthquakes in April and which has already helped inform emergency relief efforts in Nepal.

At the time Dr Rosser and the team worked with colleagues from the British Geological Survey as well as experts in Nepal and the USA, to use satellite images to generate up-to-date maps of landslides following the earthquake.

These maps were used by the Nepalese government and aid agencies to help guide the response effort. The maps were also used by the UK Government as part of its assessment of the situation as well as being fed into the United Nations Humanitarian Data Exchange.

Now the UK Government’s Department for International Development has provided funding for the team to continue this mapping work until January 2016, to give updated assessments of the landslide hazard in the worst hit areas of Nepal and help inform response and recovery efforts on the ground. 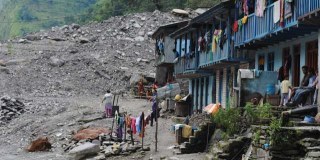