Dr Christian Liddy and Canon Rosalind Brown talk about the significance of the Magna Carta.

Eight hundred years on from when it was first written, the enduring legacy of one of the world’s most important documents lives on.

Magna Carta, first sealed in 1215, played a vital role in establishing the rule of law - the idea that all authority is subject to legal constraint.

Visitors flocked to Durham University’s Palace Green Library over the summer to see the Magna Carta and the Changing Face of Revolt exhibition which featured the only surviving 1216 issue of the charter, on loan from Durham Cathedral.

It’s estimated that almost 25,000 people viewed the exhibition from June until it closed on August 31.

People from at least 22 different countries including Australia, Kuwait, New Zealand, South Africa and the United States were among those who visited the exhibition.

In total it is estimated that the exhibition will have generated over £2 million in economic impact.

“What’s more, visitors have really engaged with the themes of revolt and citizenship. It’s been fascinating to see a debate on what we would protest for today develop on the gallery walls.”

Magna Carta is celebrated as the founding document of democracy after King John sealed the original charter in 1215. However, visitors to the exhibition were shown how the barons who forced it upon King John were acting no longer as loyal subjects but as rebellious citizens.

Dr Christian Liddy, Senior Lecturer in Durham University’s Department of History and academic curator behind the exhibition, said: “Magna Carta is famed for its role in the establishment of the rule of law.

“But Magna Carta can also tell a story of rebellion and citizenship - are there limits on what citizens can say and do? Rights were not secured by Magna Carta but remain something to be claimed and fought for today.”

Magna Carta and the Changing Face of Revolt told the story of revolt from 13th Century barons to 19th Century Chartists and beyond. The exhibition brought together treasures and iconic objects on loan from across the UK such as the Bosworth Crucifix, from the Society of Antiquaries of London, gloves worn by Charles I to his execution, from Lambeth Palace Library, and, from the Parliamentary Archives, London, the trial record of Charles I, the 1689 Draft Declaration of Rights, and the Great Reform Act of 1832.

Magna Carta and the Changing Face of Revolt is the latest in a line of successful exhibitions to be held at Palace Green Library, most notably the Lindisfarne Gospels exhibition in summer 2013.

Palace Green Library will be a host venue for the 2015 Durham Book Festival and three exhibitions about Antarctica will open this October.

Commenting after the end of exhibition, Councillor Neil Foster, Durham County Council’s Cabinet member for economic regeneration and culture, said: “Supporting culture is a key priority for the council. As well as enriching the lives of residents it brings visitors and investment into the city and wider county.

“This year, we are enjoying another bumper year of culture in County Durham with a packed calendar of events featuring the prestigious Yves Saint Laurent exhibition, the internationally acclaimed Magna Carta exhibition and culminating with the fantastic Lumiere in November. I would anticipate some significant financial benefits to the whole county linked to these acclaimed events.”

For more information about events and exhibitions at Palace Green Library visit: www.durham.ac.uk/palace.green/ 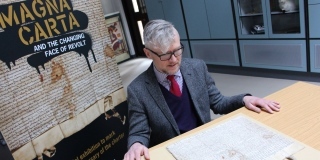 Dr Christian Liddy, Department of History, Durham University, with the 1216 issue of Magna Carta, Reproduced by kind permission of the Chapter of Durham Cathedral, 1.2.Reg.3