Investment in innovative science could reduce need for animal research 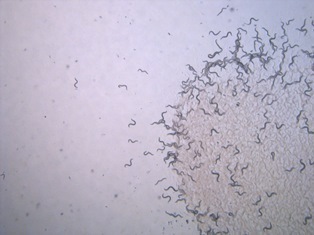 Durham University has been awarded £74,993 to reduce animal use in science and improve animal welfare.

Dr David Weinkove, in Durham’s School of Biological and Biomedical Sciences, will use the money to fund a pilot study to produce proteins from nematode worms for research and therapeutic use.

The funding, which will be shared with Professor William Harnett at the University of Strathclyde, has been funded by the UK’s National Centre for the Replacement, Refinement and Reduction of Animals in Research (NC3Rs).

In total NC3Rs has awarded 20 research and technology development grants, worth £4.8million to universities, specialist institutes and small-to-medium-sized enterprises (SMEs) across the UK.

Parasitic worms secrete proteins that interfere with the immune systems of humans.

By understanding how these proteins work scientists believe they could use this knowledge to treat diseases caused by an overactive immune system, such as arthritis, eczema, asthma and irritable bowel syndrome.

Globally, worms used in this type of research are currently grown in rodents, though this work is not carried out at Durham University.

Dr Weinkove said: “Our project will use the non-parasitic worm Caenorhabditis elegans, which can be genetically modified to produce proteins found in parasitic worms, but does not need a host to grow in, thereby replacing the use of rodents.

“The research will also enable proteins from parasites that cannot grow in rodent models to be produced and characterised, leading to further understanding of how the immune system can be modified for therapeutic purposes.”

All projects involving animals at Durham, including observational studies which are not subject to Home Office licence, are scrutinised by an ethical review process and are strictly regulated.

The University is also committed to the principles known as the ‘three Rs’ and ensures they are applied in all cases, which are:

Professor Chris Higgins, Vice-Chancellor of Durham University, said: “Studying animals in the laboratory is sometimes the only way to gain the critical understanding behind the discovery and development of medical treatments for conditions such as cancer and diabetes.

“However we are also committed to reducing the number of animals used in research and in seeking alternatives where possible. We are very pleased with this award which allows us to deliver on this commitment.”

Nationally, novel methods being funded by NC3Rs will reduce reliance on a range of animal species and accelerate the discovery of treatments across several therapeutic areas.

These include the development of an entirely new way of studying tuberculosis infection by using human cells, an alternative method for anti-cancer drug development to replace the use of millions of mice globally, and a 3D cell model of the bovine airway which uses abattoir material to study bovine respiratory diseases, the cause of around 30 per cent of cattle deaths worldwide.

Minister for Universities and Science, David Willetts, said: “This funding from the NC3Rs to support research, infrastructure and technology development is vital to ensure the UK remains at the forefront of international efforts to reduce animal use in science while seeking breakthroughs in treating serious disease.”

The Medical Research Council (MRC) is the major core funder of the NC3Rs.