A simple mesh to clean up oil spills

How a simple mesh could clean up oil spills

Oil spills happen frequently ranging from large ones like the 2010 Deepwater Horizon disaster to smaller ones on industrial sites. All have a damaging impact on the environment and wildlife.

The clean up is by no means simple and there is a clear need for new easy, quick ways to separate oil from water.

Our surface scientists have now developed a coated mesh which could be a faster and more eco-friendly way to clean up oil.

The stainless steel mesh, similar to what you might find in screen doors to keep flies out, can not only separate oil from water but also kill water-borne bacteria very successfully. Tests have so far shown the mesh separates oil from water with 100% efficiency and kills at least 99.9% of E Coli and Staphylococcus bacteria in the water.

The coating is easily applied to the mesh by simply dipping or spraying in a matter of seconds and can then be re-used multiple times. It works for different types of oil including engine oil and olive oil for example. As well as oil spills in the ocean, other potential applications include food processing and chemical industrial plants.

Current methods used often soak up a lot of water too and need extra steps to remove the oil from the ‘sponges’ which are commonly used. This makes them less efficient as well as more costly and time-consuming to use on a ship.

The team from our Chemistry Department have invented a smart coating that loves water (known as hydrophilic) and one that rejects oil (known as oleophobic). When the oil-water mixture is poured onto a coated mesh, the water drips through but the oil stays on top of the mesh. 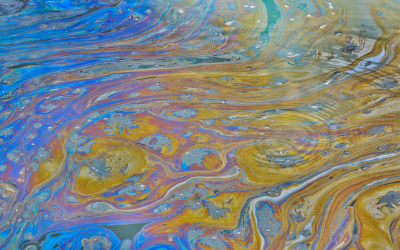