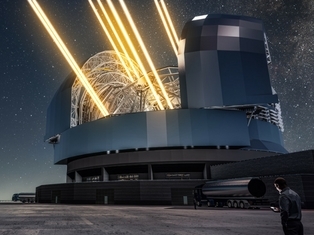 A cutting-edge component of what will be the world’s largest telescope has passed critical tests.

HARMONI, being developed in part by scientists at Durham University, will now move to the detailed design phase.

The instrument will form part of the Extremely Large Telescope (ELT) currently under construction in the Atacama Desert, northern Chile.

Astronomers and engineers at our Centre for Advanced Instrumentation (CfAI) are developing adaptive optics technology for HARMONI to remove atmospheric blurring so scientists can see distant objects more clearly.

Our scientists are also working on another proposed instrument for the ELT, called MOSAIC. They are providing the adaptive optics and designing the mechanical structure for MOSAIC, which will allow astronomers to view different areas of the sky at the same time.

Some of the components will be built and tested at the CfAI’s facility at the NETPark science, engineering and technology park in County Durham, UK.

The ELT will be the biggest optical telescope ever built, standing at 74 metres high, and will have a giant main mirror that is 39 metres in diameter.

The main mirror will be made of 798 hexagonal segments, each about 1.4 metres wide and five centimetres thick.

When it sees first light in 2024, the ELT will provide detailed images of planets, stars and galaxies, while also probing the nature of dark matter and dark energy.