Investigating the effects of volcanoes on climate

Investigating the effect of volcanoes on climate

Researchers investigating the potential impact of volcanic eruptions on climate in the world’s polar regions have concluded that they could have a destabilising effect on ice sheets.

The Durham University team found that massive volcanic eruptions could potentially cause localised warming in Antarctica and Greenland.

The research looked at links between huge volcanic eruptions and polar temperatures during the last Ice Age.

The findings suggest that some periods of Antarctic warming between 30,000 to 80,000 years ago were triggered by volcanic eruptions in the Northern Hemisphere that caused a shift in the world’s weather patterns.

Conversely, the research also suggests that Southern Hemisphere eruptions could have triggered abrupt warming in Greenland during the last Ice Age.

The Durham team, from the Department of Earth Sciences, said their findings showed that the potential effects of volcanic eruptions should be considered when predicting future climate change.

Previous research shows that there were several episodes of rapid and substantial Greenland warming of around 10C during the last Ice Age.

Such a rise could potentially have catastrophic consequences for the Greenland ice sheet and sea level rise if this were to happen today.

Lead author Dr James Baldini said: “Although this might not be an immediate threat, we should consider this new perspective regarding the effects that very large volcanic eruptions might have on future climate change.

“Current climatic background conditions are different now than they were during the last Ice Age as there are no large Northern Hemisphere ice sheets to amplify the effects of the original eruption.

“However, man-made greenhouse gas and sulphate emissions since the Industrial Revolution have already had an effect on weather patterns.

“We have to consider the reality that a large volcanic eruption could add to this problem in an unexpected way.

“For example, a large Northern Hemisphere eruption producing even only moderate Antarctic warming, when combined with an already unstable West Antarctic Ice Sheet, could have very serious consequences.”

The researchers examined data from previous studies looking at ice core samples and stalagmites that provide a natural record of changes in temperature and rainfall patterns over long periods of time.

They found evidence suggesting that changes in the position of weather fronts were associated with volcanic eruptions.

For example, the Northern Hemisphere Toba super-eruption about 74,000 years ago seems to have initiated substantial cooling in Greenland, warming in Antarctica, and a southward movement of the tropical rain belts.

True super-eruptions only occur once or twice every hundred thousand years, with the last known super-eruption happening in New Zealand about 26,000 years ago.

Such eruptions are 100 to 1,000 times larger than the eruption of Vesuvius which destroyed the Roman city of Pompeii.

However, somewhat smaller eruptions occur more frequently, with at least one very large eruption happening every thousand years, and these were considered in the study.

The research was funded by the European Research Council. 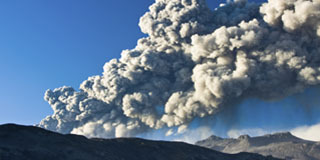 Investigating the effects of volcanoes on climate