Given concerns about retreat / stability of the marine‐influenced West Antarctic and Greenland ice Sheets, and consequent sea‐level rise, it is imperative that we can predict the future rates of change of these large ice masses. Our current ability to do so is limited and a weakness in climate science. Numerical ice sheet models - capable of making predictions ‐ exist and are being refined, but they have yet to be adequately tested against data on the pattern and timing of a shrinking ice sheet. We are therefore conducting a systematic and directed campaign to collect and date material to constrain the timing and rates of change of the marine‐influenced retreating British‐Irish Ice Sheet.

We will test the following three hypotheses: 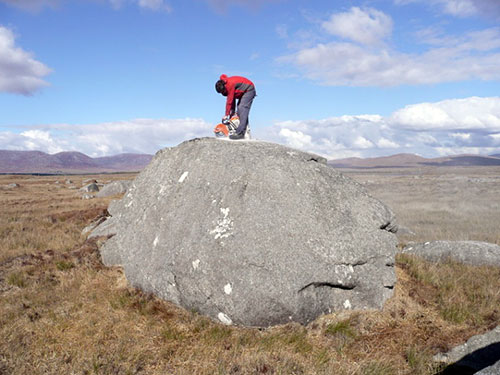 Data will be collected from 8 transects from shelf edge to onshore. Terrestrial fieldwork is already well underway. The marine component comprises two NERC funded research cruises that will take place in 2014 and 2015. The goal is that by the end of BRITICE‐CHRONO, the British‐Irish Ice Sheet will become the best constrained anywhere and a benchmark against which predictive ice sheet models can be improved and tested.