Formal disposal of the dead is widely practised today, but this has not always been the case; among prehistoric societies so few burials are encountered that it appears to have been the exception rather than the rule. When did ‘formal’ burial and cremation become generalised? What significance did this have for the development of religious belief and human self-awareness?

The project, which began in October 2013 is funded by the John Templeton Foundation until September 2014. The Principal Investigator is Professor Chris Scarre, who is a specialist in the prehistory of western Europe. His Co-Investigators are Professors Graham Philip (specialising in the Levant), Charlotte Roberts (specialising in skeletal analysis) and Douglas Davies (an anthropologist and theologian). Two post-doctoral researchers are working on the project: Dr. Jennie Bradbury and Dr. Mandy Jay, specialising in the Near East and in Britain respectively.

By examining archaeological data from across two regions (Britain and the Levant) this project will provide a new understanding of the emergence of religious belief and self-awareness, as well as charting changing concepts of what it means to be human. We shall explore the temporal, social and economic contexts of changing relationships between human socio-religious beliefs and concepts of the body and the afterlife. Do burials represented in the archaeological record of Britain and the Levant constitute the ‘mainstream’ or are they the result of highly specific selection processes?

The first step for this project is to compile an access database of burial information from the two regions covering the Neolithic through to the Roman period (10, 000/4000 BC-AD 400). The absolute date coverage is different for the two regions, the Neolithic beginning much later in Britain (e.g. c. 4000 BC) than in the Levant (e.g. c. 10,000 BC). Data gathered from both published and unpublished sources will be linked through to a Geographical Information System. This will allow variations in mortuary practices over time and space to be analysed and detected. Examples of the type of questions which will be answered are: How many people do we have cremation evidence for in the British Bronze Age? During what periods is the prevalent method of corpse disposal inhumation or cremation and how do these compare across the regions? What changes occur over time in the accompaniment of the body with particular types of grave goods? Are adults/non-adults; females and males being treated in the same ways?

The project will also compile proxy data for estimated populations and/or occupation and activity from the two regions. This will enable us to examine large scale patterns and variations in the numbers of individuals found in the burial record. For example, can we identify certain periods/regions where there is clear evidence for substantial populations/activity yet the dead appear to be ‘Invisible’? These ‘big picture’ trends will allow us to consider how differences in the treatment of the majority of the population may have changed over time. We will be able to compare and analyse the absolute numbers involved, as well as the processes and rites surrounding the disposal of the corpse. By examining practices, which we might today find unusual, such as moving body parts from one place to another or depositing them in separate locations, we will challenge current perceptions regarding processes of death and dealing with the corpse. Not only will this allow us to question whether inhumation and cremation, comparable to our modern practices, are relatively recent, but in this way the ‘Invisible Dead’ may start to become visible. 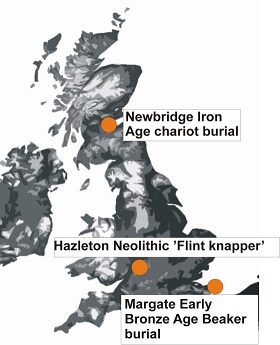 Topographic map of Britain showing the locations of the burials illustrated. 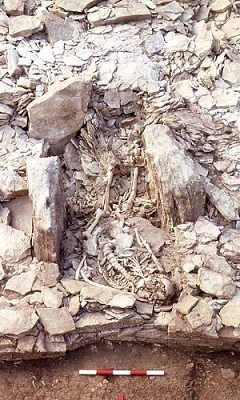 Neolithic burial (around 3500 BC) from the chambered long barrow at Hazleton on the Cotswolds. A collapse of stonework at the entrance to the chamber prevented any further burials taking place at this part of the monument, so burials were accumulated in the entrance itself. The final deposit was an extended inhumation, which is very rare in a long barrow, and previous occupants were removed to make room for him. Underneath his right elbow there was a very large flint core, and just where his left hand was there was a pebble hammerstone. So he is known as the ‘flint knapper’, buried with the tools of his trade. Photograph copyright Alan Saville. 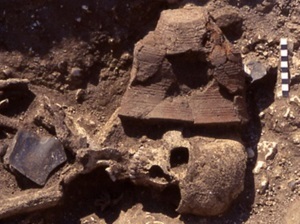 Beaker period burial (2460-2200 BC) from Margate in Kent, excavated in 2005 by the Trust for Thanet Archaeology. Many Early Bronze Age burials in Britain are accompanied by this form of pottery vessel which has a very specific shape and has affiliations with Continental vessels. Photograph copyright TfTA. 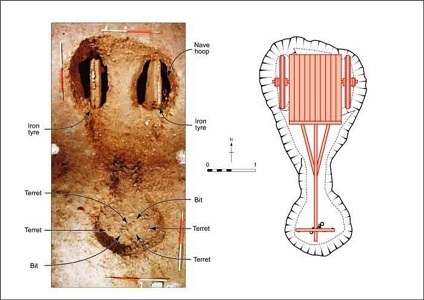 Iron Age chariot burial (520-370 BC) from Newbridge, near Edinburgh in Scotland, excavated in 2001 by National Museums Scotland and Headland Archaeology. The soils in Scotland are very acid so that no human bone is preserved from this burial, although it is believed that a body would have been present. Similar burials have been found in Yorkshire, where the chalk geology preserves bone well. It is important for this project that we record the presence of burials where bones have not been preserved, as well as those where skeletons have been found. Photograph copyright NMS.

Group photograph from Feb Board meeting

Map of the Levant 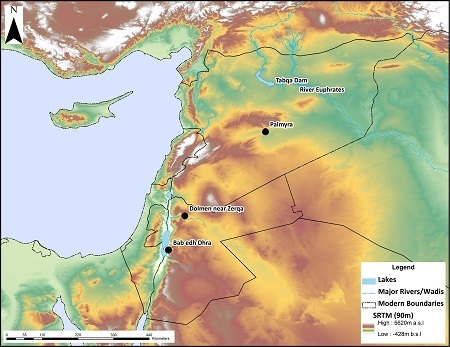 The area being studied by the Invisible Dead project stretches from the River Euphrates in the east to the Mediterranean in the west. The southern limit of the study area is marked by the modern border of Jordan and Saudi Arabia, whilst the northern limits reach the modern border between Syria and Turkey. 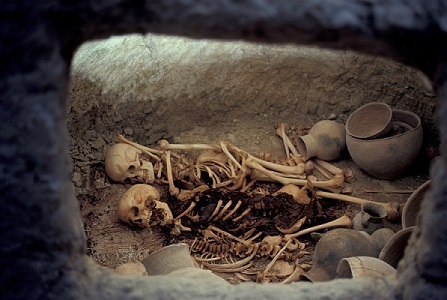 Due to the quality and quantity of information available, Bab edh Dhra represents one the key sites for interpreting Early Bronze Age burial practices in the Southern Levant. In addition to skeletal information (including age, sex, method of disposal etc.) the ‘Invisible Dead Project’ will also be recording the different types of material culture which are found in burial contexts e.g. pottery vessels such as jars and bowls in order to identify any particular relationships which might be present between particular types of material culture and possible types of person. 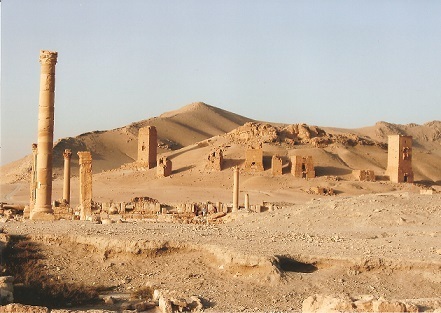 There are a huge range of different types of burial monuments across the Near East. The ‘Invisible Dead’ database will include records which characterise the morphology of burial structures and features. This will enable an analysis of the spatial and temporal relationships between different forms of disposal of the human corpse and associated monuments or burial structures. 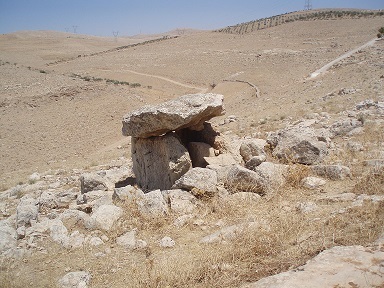 Much of the data available for the Near East and Britain is composed of brief entries within national databases and/or local sources listing the presence of burial structures, such as dolmens along with a GPS/Map Co-ordinate. This data cannot compare to the wealth of information extractable from sites where detailed excavation and skeletal analysis has been carried out, however, without including them within a general analysis it will be impossible to examine large scale patterns and variations in changing burial practices over time.