When ice sheets flow across the landscape they often produce particular landforms, the best known of which are drumlins. These are elongate streamlined hills, kilometres in length and tens of metres in height. Mega-scale glacial lineations (MSGL) are similar to drumlins but exist at huge scales (up to 100km in length). They record the ice flow direction at the time at which they were formed, and our contention is that if we know how they formed, then we would learn much more about how ice sheets flow. Understanding the formation of subglacial bedforms, such as drumlins and MSGL has suddenly become very important because society is concerned about how the ice sheets in Antarctica might respond to global warming.

The approach that we take in this project, funded by the Natural Environment Research Council, is based on a simple idea drawn from how nature works to produce other (non-glacial) types of patterns. A classic example is wave-like patterns in clouds. Such repetitive patterns are known to form by instability mechanisms. Instability is said to occur in a system when very small irregularities (say in air flow in a cloud) spontaneously grow and often produce regular patterns. We view subglacial bedforms as repetitive patterns and propose that some form of instability produced them.

By mathematical analysis and computer-modelling we have already established that the interacting flow of ice and the underlying sediment can produce instabilities. But this is not enough to convince us that it is the right answer. We now need to establish if instabilities grow to produce landforms, such as the drumlins, which we can observe in real life. If for example the instability only produces landforms 5mm in size or 1000km in size, or of the wrong shape, then we know we have got it wrong. As such, we will map and measure drumlins and mega-scale lineations (around 60,000 examples) that exist in Canada, UK, and Ireland and on the seafloor around Antarctica to see what their size and characteristics are. This cannot be achieved by fieldwork and so we will use satellite images and geophysics. The data will be used to test the modelling. If the model turns out to be correct then the results become critical for understanding ice streams and will help predict their future behaviour. Also, we anticipate that whole assemblages of landforms beneath the Antarctic Ice Sheet will soon be found. Our results will provide a sound physical basis for interpreting what they tell us. 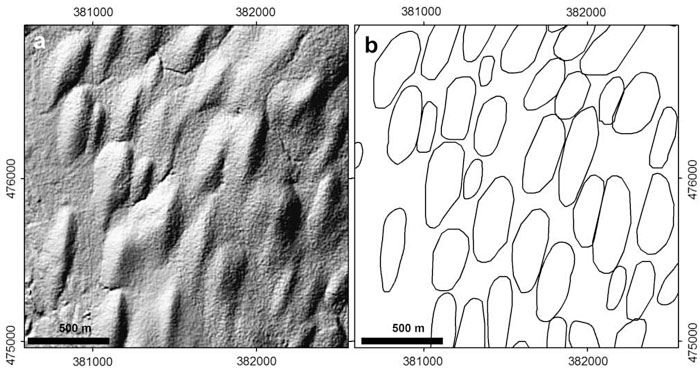 Stokes, C.R., Spagnolo, M. and Clark, C.D. (2011) The composition and internal structure of drumlins: complexity, commonality, and implications for a unifying theory of their formation. Earth-Science Reviews, 107, 398-422.