This research project is led by Dr Dave Roberts in collaboration with other colleagues in the department (Prof Antony Long). The study investigates the marginal subglacial bedrock bedforms of Jakobshavns Isbrae, West Greenland, in order to examine the processes governing bedform evolution in ice stream and ice sheet areas, and to reconstruct the interplay between ice stream and ice sheet dynamics.

Recent reviews suggest that there are two principal types of modern ice streams, pure ice streams and isbraes, although these may actually represent the two end members of a continuum, as some ice streams have topographically controlled onset zones which are lost downstream beneath trunk zones (Stokes & Clark 2001; Truffer & Echelmeyer 2003). Pure ice streams are largely controlled by the presence of conditions conducive to rapid basal sliding (e.g. a deforming bed) and/or ice sheet self-regulation, whereas high ice flow velocities in isbraes are induced by the topographic drawdown of ice through over-deepened troughs.

Our knowledge of subglacial processes beneath ice streams is largely based on bore-hole investigations and remotely sensed seismic or aero-geophysical observations (e.g. Anandakrishnan et al. 1998; Bell et al. 1998), as direct observation of subglacial bedforms has been limited. Indeed, most of our understanding of ice stream subglacial processes has been deduced from palaeo-ice stream imprints, with soft-bedded, geomorphic evidence providing the major source of information (Stokes & Clark 1999; Canals et al. 2000; Lowe & Anderson 2002; Serup et al. 2003). In contrast to soft-bedded systems, the identification and understanding of ‘rigid bed’ bedforms produced through erosion beneath isbrae-type ice streams has been little studied. There are a number of reasons for this. Firstly, with the exception of Jakobshavns Isbrae, little contemporary work has been undertaken on subglacial environments beneath modern isbrae-type ice streams. The Rutford Ice Stream in Antarctica does lie in a subglacial trough, but it is underlain mainly by unconsolidated sediments (Smith 1997). Secondly, most palaeoenvironmental reconstructions of ice stream occurrence have been in areas where deforming bed mechanisms have been influential in controlling ice stream incidence, with drift bedform transitions holding the key to understanding ice stream behaviour (Clark & Stokes 2001). Thirdly, bedrock bedforms are challenging sources for palaeoglaciological data because they may be formed over multiple glaciations and because bedrock structure can influence bedform evolution.

This research focuses on Jakobshavns Isbrae, the largest and fastest flowing isbrae-type ice stream in the northern hemisphere (Bindschadler 1984). It investigates controls on the formation of bedrock bedforms in isbrae and ice sheet areas by exploring the influence of ice thickness and flow velocity on bedform evolution. In addition, the differences in the mechanisms responsible for bedrock bedform development compared to drift bedforms are explored. The bedform assemblages are then used to investigate the relationships between basal conditions and ice stream motion. Finally, the bedform and ice flow direction evidence is used to explore the interplay between ice stream and ice sheet zones, both locally and regionally across Disko Bugt.

Bedform density is higher in ice stream areas and whalebacks are common. This is related to higher ice velocities and thicker ice which suppress bed separation. However, modification of whalebacks by plucking occurs during deglaciation due to ice thinning, flow deceleration, crevassing and fluctuations in basal water pressure.

The bedform evidence points to widespread basal sliding during past advances of Jakobshavns Isbrae. This was encouraged by increased basal temperatures and melting at depth, as well as the steep marginal gradients of Jakobshavns Isfjord which allowed rapid downslope evacuation of meltwater leading to strong ice/bedrock coupling and scouring. In contrast to soft-bedded ice stream bedforms, the occurrence of fixed basal perturbations and higher bed roughness in rigid bed settings prevents the basal ice subsole from maintaining a stable form which, coupled with secondary plucking, counteracts the development of bedforms with high elongation ratios. 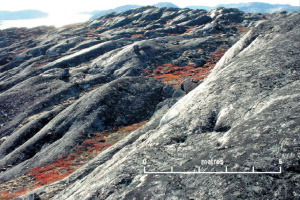