In this project we are investigating the connections between monsoon climate change, orbital and non-orbital solar insolation on millennial and centennial timescales. We are also investigating possible teleconnections between the Asian monsoon system and other climate systems including the northern North Atlantic and palaeo-ENSO systems. In the first part of this project, we have examined estuarine records obtained from the Pearl River estuary. We have developed a new proxy for monsoon intensity based on δ13C and C/N ratio from bulk organic carbon. This is predominantly controlled by the source of carbon material to the estuary linked to freshwater flux from the catchment, in turn linked to monsoonal rainfall. The results show a close relationship between monsoon driven freshwater discharge and changes in solar insolation during the Holocene (Zong et al., 2006). This research is being extended by a PhD student, F. Yu (2005-2008), who is investing modern organic carbon sources and characteristics and reconstructing monsoon driven freshwater flux from a high-resolution estuarine record. The second part of this project started in 2007 and involves collection and analysis of a long sedimentary record from a maar lake in southern China. This investigation will be carried out partly by a PhD student, C. Brodie (2007-2010), who will analyse organic carbon isotopes, carbonate oxygen isotopes and dust concentration from the core. 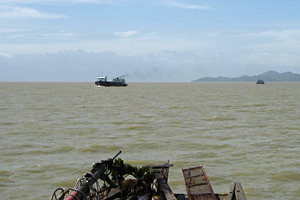 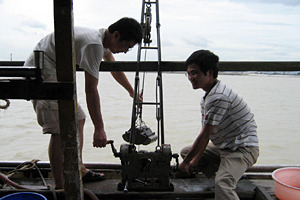 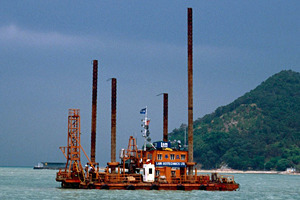 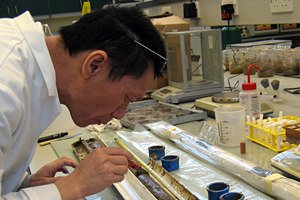