In this project we seek to investigate the relationship between major changes in the prehistoric human occupation and exploitation of the Yangtze lowlands and variations in macro-scale environmental factors, primarily climatic changes caused by fluctuations in the East Asian Monsoon or by movements in relative sea level as they affected the east China coast. We are concentrating upon an apparent collapse of later Neolithic culture in a low-lying area around the Lake Taihu that occurred between 5,000 and 4,000 years ago. We are testing the role of environmental factors, in particular climatic cooling caused by the retreat of the Monsoonal front at this time, causing greatly increased precipitation and rising sea level in the lower Yangtze. We are generating new, high-quality and independently dated palaeoecological records from fine-resolution sampling at several sites in the area to separate the effects of climate and sea level in the palaeoenvironmental record. Our sources of proxy data include pollen, marine and freshwater algae, fungal spores and micro-charcoal, to reconstruct in detail the environmental history of this coastal wetland landscape during the period of Neolithic cultural withdrawal, and to assess whether the environmental changes were of sufficient magnitude to be the driving mechanism for cultural collapse.

Results at this stage of the project indicate that significantly increased cooling and increased wetness coincide with the archaeological period of study, with elevated water levels and spread of wetland sedimentation in the Lake Taihu area, shown by a range of microfossil taxa sensitive to changes in water depth and quality. Lower temperatures relative to the preceding mid-Holocene are revealed by changes in the proportions of evergreen, deciduous and coniferous woodland in the area. The role of sea-level rise in elevating freshwater tables is under evaluation by study of a transect of sites from the palaeo-coast to more inland locations. The study has provided detailed data regarding the agricultural systems of Neolithic farmers during this period, prior to their withdrawal. We have also studied a site at Kuahuqiao in this lowland that provided evidence of very early cultivation of rice in coastal marshes by people undergoing transition from foraging to farming, and who used environmental manipulation by fire and floodwater control to prepare and maintain paddy style wet grassland for this purpose (Zong et al., 2007).

This project is funded by the Leverhumle Trust, UK (2006-2008) and supported by a visiting professorship from the East China Normal University, Shanghai. Collaborators include Professor Z. Chen and Dr Z. Wang of ECNU, Professor C. Chen of Fudan University, and Dr J. Chen of Shanghai Museum. 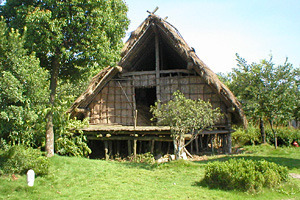 A reconstructed hut – a possible dwelling of Neolithic communities, supported by wood pilings and elevated from wet ground 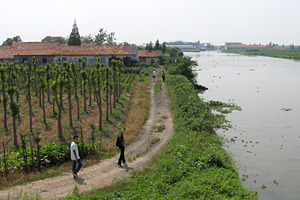 The Tangchunmiao site, buried under vegetable beds next to a man-made drainage channel