Located in the foothills of the Himalayas, the Kathmandu Valley is home to a unique collection of monuments of carved wood, brick, tile and stone. Attesting to the collective artistic and architectural ingenuity of its inhabitants, the majority of these standing remains date from the sixteenth century onwards (e.g. Slusser 1982; Hutt 1994; Korn 2007; Gutschow 2011). As a result, the early history of Kathmandu has been largely reconstructed from its rich corpus of textual records, including over 200 inscriptions dating to the Licchavi Period (fifth and eighth centuries CE) (Regmi 1983), manuscript colophons (eighth century CE onwards) (Petech 1984) and chronicles (fourteenth century CE onwards)(Vajracharya and Malla 1985). Reflecting traditional disciplinary boundaries, these textual records have often been studied in isolation from attempts to identify the physical locations of Kathmandu’s early cultural phases. Despite the Valley’s rapid urbanization, few systematic excavations have been undertaken (Deo 1968; Verardi 1988, 1992; Khanal and Riccardi 2007), leading to the unrecorded destruction of traces of its early urban history. Post-earthquake redevelopment and associated infrastructure is intensifying this threat, accelerating the urgency for multi-disciplinary post-disaster archaeological assessments and protection.

Two areas particularly at risk are Pashupati and Handigaon, both of which are believed to be locations of some of the earliest urbanized settlement within the Kathmanu Valley on account of a combination of local tradition, chance discoveries and the presence of concentrations of Licchavi inscriptions. In response, a team of archaeologists, geoarchaeologists, epigraphers and heritage practitioners from Durham University, the University of Stirling, the Austrian Academy of Sciences, the Department of Archaeology (Government of Nepal) and the Pashupati Area Development Trust (PADT) undertook fieldwork to identify, characterise and protect their subsurface heritage.

Pashupati is part of Kathmandu’s UNESCO World Heritage Site, and comprises temples, ashrams and funerary ghats alongside the sacred Bhagmati River. Nepal’s most favoured cremation site, it is a focus of religious veneration, with over six million pilgrims visiting the site annually, most spectacularly during the religious festival of Shivaratri, when a peak of around 1.5 million, including over 5,000 Sadhus, or holy ascetics. Providing facilities for this volume of visitors has led to challenges in the balance between facilitating religious practice and ensuring heritage protection.

Our fieldwork has identified traces of vulnerable subsurface heritage across the site. Within the walled seventeenth century wooded park of Bhandarkhal, for example, we combined auger cores, geophysical survey and excavation to map substantial archaeological features below the ground. Our subsequent excavations in a large central depression confirmed the presence of a monumental water tank measuring 25 by 20 metres. Unlike brick-lined Medieval tanks found elsewhere within Kathmandu, it was constructed with an earthen edge. Brick structures had been built alongside the tank, and artefacts recovered included Licchavi coins and pottery sherds stamped with Licchavi script.

Auger cores across the park confirmed the presence of subsurface cultural deposits and subsequent geophysical survey located potential wall alignments, ditches and trackways. The presence of monumental platforms and stone-lined drains, sealing earlier cultural remains below, was then confirmed through excavation. Collectively, these discoveries indicate the possibility of the survival of Licchavi settlement within Bhandarkhal but we await the results of the dating. Additional deep excavations, part of post-disaster fieldwork, close to the main Temple complex at the Gurujyu Sattal exposed ‘in situ’ brick structures dating to the eighth century CE. These represent the earliest scientifically-dated archaeological remains at Pashupati and confirm the presence of significant subsurface heritage within this part of the UNESCO World Heritage site.

Based on its rich cluster of Licchavi inscriptions, and evidence of Licchavi Period brick structures exposed during excavations in the 1960s and 1980s (Verardi 1988, 1992), Handigaon has been identified as a potential pre-Licchavi capital and the site of ‘lost’ Licchavi palaces, including the fabled ‘Kailashkut Bhawan’ of King Amsuvarma (r.605-621 CE) (Tiwari 2002). The most striking evidence for its antiquity and significance was found by chance in the early 1990s, when a 1.74 metre stone sculpture of King Jayavarma, dating to 185 CE, was found during the digging of house foundations (Tamot and Alsop 1996; Mishra 2000). Illustrating the settlement’s early significance, it also highlights the threat from unchecked development and the encroachment of its remaining open spaces.

In response to these threats, we used Ground Penetrating Radar to survey paved areas and roads, and mapped the depths and extent of subsurface features in a sample of locations across Handigaon. Although many of the features were modern utilities, we also identified anomalies representing brick wall footings and stone covered drains. Additional magnetometer survey was conducted around the Sita Bhawan (or Bal Mandir), an early twentieth century Neo-Classical palace close to the site where King Jayavarma’s statue was discovered (Tiwari 2002).

Several narrow linear anomalies, interpreted as narrow walls, were identified at the Sita Bhawan and our auger cores suggest that they are part of a large-scale levelling and landscaping of the area in preparation for the palace’s construction. This was later confirmed by observing truncated Rana Period garden features within the sections of foundation trenches cut for a new post-earthquake development at the site. Although these features relate to the twentieth century, and not early settlement, our research highlights the need for the protection of broader ranges of Kathmandu’s heritage. Indeed, the Sita Bhawan has been categorised by ICOMOS (Nepal) as a significant architectural structure in its ‘Inventory of 19th and 20th Century Architectural and Industrial Heritage of Nepal’ (ICOMOS Nepal 2020). While there is growing recognition of the need to document and record the standing architecture of this lesser-researched category in Nepal, there is also a need to protect and contextualise its associated subsurface archaeology.

We co-developed Archaeological Risk Maps from the results of our research to highlight the location of areas of surviving in-situ subsurface archaeological heritage within seemingly open areas for site managers and local authorities. Following consultation with the Pashupati Area Development Trust, and linked to the co-production of the archaeology strand for Pashupati’s forthcoming Master Plan, new non-intrusive pathways were constructed within Bhandarkhal to create a public recreational area while protecting the site’s significant subsurface heritage. The Department of Archaeology (Government of Nepal) has also invited the team to undertake survey elsewhere within the Valley to better understand other potentially significant sites at risk. By incorporating archaeological assessments and risk maps into development projects, it is hoped that Kathmandu’s subsurface heritage, from its origins through to its recent past, can be protected for future generations. 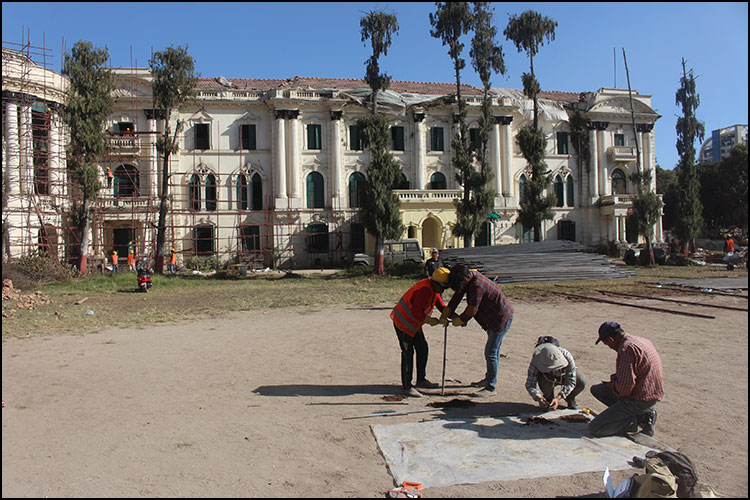